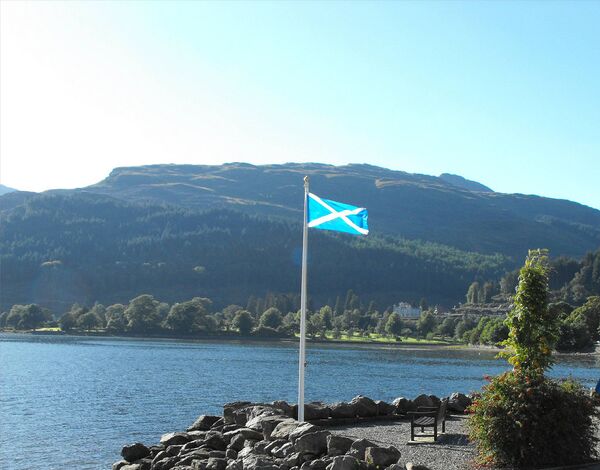 Noam Chomsky, one of the world’s most respected intellectuals and political thinkers, told RIA Novosti that his “intuitions favor” a “yes” vote in the upcoming referendum on Scottish independence to be held September 18.

EDINBURGH, April 24 (RIA Novosti), Mark Hirst – Noam Chomsky, one of the world’s most respected intellectuals and political thinkers, told RIA Novosti that his “intuitions favor” a “yes” vote in the upcoming referendum on Scottish independence to be held September 18.

Chomsky told RIA Novosti that he is continuing to study the details and consequences of potential Scottish independence, but confirmed he has “been following the debate with interest.”

The intervention is a major boost for the “yes” campaign, given Chomsky’s international reputation.

Professor Hugh Pennington of the University of Aberdeen is a prominent academic campaigning against independence.

Pennington, a professor in bacteriology, told RIA Novosti that he was “surprised and disappointed” by Chomsky’s support for independence.

“Professor Chomsky is obviously very well-regarded,” Pennington said, adding that other academics would take note of his backing for Scottish independence and study his arguments.

Responding to the comments, a spokesman for the pro-independence organization Yes-Scotland told RIA Novosti “it is encouraging, but not surprising, that such an internationally-renowned political thinker such as professor Chomsky can see the benefits of Scottish independence.”

“Professor Chomsky, of course, is not a nationalist and increasing numbers of people in Scotland, particularly Labour supporters and those who have no party political affiliation at all, also see the logic of putting Scotland's future in Scotland's hands,” the spokesman added.

A spokesman for the pro-UK Better Together campaign told RIA Novosti “in Scotland, when people study the issues in detail they conclude that we are stronger and better together as part of the UK.”

Professor Chomsky said he hoped to see greater devolution of power throughout Europe.

“No one wants to restore the Ottoman Empire, obviously, but in some respects it had the right idea: let people manage their own affairs, with cooperative federal arrangements, and as few barriers as possible,” he told RIA Novosti.

Professor Noam Chomsky has authored more than 100 books and has an international reputation as one of the world’s leading philosophers.