Single Cultural Space Should Be Created in Russia – Putin 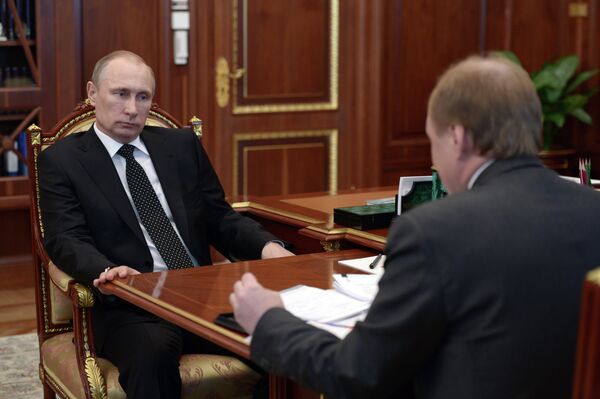 “Culture is the main essence uniting a nation. It doesn’t much matter what is written in a nationality box. What’s important is how does a person identify himself … in which environment did he grow up and what are his moral guidelines? In this sense it’s very important for us to create a single cultural space," Putin said.

The President also underlined the necessity of developing cultural institutions and support for cultural events.

Culture should play a historic role under difficult foreign policy conditions, the cultural adviser to the Russian President said.

“It has to play a consolidating, unifying role. Provocative appeals which could have led to isolation are very dangerous here. We cannot allow any internal severance. We have a single cultural space. Talented people may have different points of view, but it is important that the foundations of national cultural policy unite people. This is the goal of this document," Tolstoy said.

Culture could become an instrument of soft power, since Russian culture still inspires respect and interest in the West, Tolstoy said, adding that the adoption of the policy is a very serious message for the country and the world.

A special working group, headed by Chief of Staff Sergei Ivanov, was created by a presidential order to develop “principles of state policy in the field of culture." Presidential Adviser on Culture Vladimir Tolstoy was appointed as executive secretary of the working group.

The draft document is based on numerous speeches by Putin over the past two years, according to Tolstoy. Discussion of the document began in April, after it was submitted to parliament before being passed on to the general examination.

The main thesis of the draft document states that “Russia is neither Europe nor Asia,” and characterizes the country as “an ancient, independent , original civilization,” according to Russian Culture Minister Vladimir Medinsky.