OSCE Concerned by Reports of Detained US Journalist in Ukraine 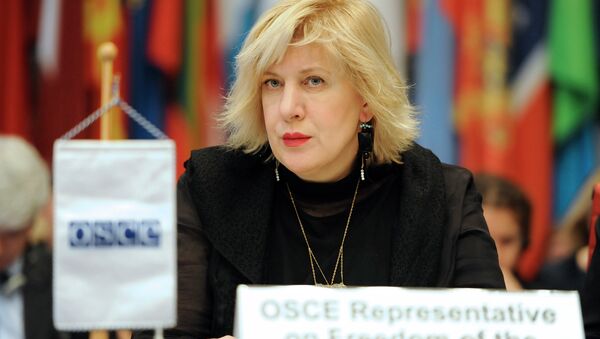 A representative of the Organization for Security and Cooperation in Europe voiced concern Wednesday about reports of a US journalist detained in the eastern Ukrainian city of Slaviansk.

VIENNA/SLAVIANSK, April 23 (RIA Novosti) – A representative of the Organization for Security and Cooperation in Europe voiced concern Wednesday about reports of a US journalist detained in the eastern Ukrainian city of Slaviansk.

“I remain deeply concerned about the ongoing negative pattern in relation to journalists’ safety in Ukraine,” said Dunja Mijatović, OSCE Representative on Freedom of the Media.

“I call on all those responsible to stop harassing and attacking journalists and let them do their job. Simon Ostrovsky should be released immediately,” she added.

The OSCE has yet to receive official confirmation of Ostrovsky's detention, a spokesperson for Mijatović told RIA Novosti.

The city of Slaviansk in eastern Ukraine has seen waves of pro-federalization rallies in recent weeks. Ukrainian authorities have attempted to crack down on the protests by force, and the city saw a deadly attack by unidentified gunmen on self-defense forces over the weekend.

Ostrovsky, a US journalist with Vice News, was reportedly captured by unidentified people in uniform in Slaviansk on Tuesday, the OSCE said citing media reports of statements by self-proclaimed local mayor Vyacheslav Ponomaryov.

A RIA Novosti correspondent in Slaviansk could not immediately confirm the report of Ostrovsky’s detention, saying Ponomaryov told journalists at a press conference on Tuesday that Ostrovsky “is here, working on an article.”

Ostrovsky said in a Twitter message on Monday that Ponomaryov told reporters at the press conference to leave the building as a single group, saying this was “the only way to ensure the cover-up.”

Vice News said in a statement it “is aware of the situation and is in contact with the US State Department and other appropriate government authorities to secure the safety and security of our friend and colleague, Simon Ostrovsky.”

A State Department official said "we have no further information to share out of concern for his safety and to prevent complicating his safe return," CBS News reported.

Earlier this week, Belarusian, Italian and French journalists were reportedly briefly detained by unidentified individuals in uniform in Slaviansk, the OSCE said.

The reports of the journalists' detention came after a series of violent clashes in Ukraine on Sunday, when unknown gunmen, allegedly from the Right Sector far-right group, drove by a checkpoint in the city of Slaviansk and opened fire at self-defense forces celebrating Easter, killing at least three people.

The Russian Foreign Ministry said the provocation of the militants pointed to Kiev's reluctance to disarm nationalists and extremists.