OPINION: Xenophobia, Anti-Semitism on the Rise in Ukraine 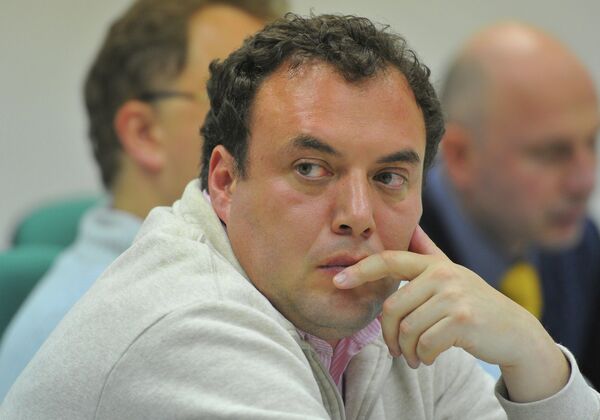 Brod, who is also a member of the Presidential Council for the Development of Civic Society and Human Rights, said the Moscow Human Rights Bureau has unveiled a report focusing on new negative trends in modern Ukrainian society.

The report marks growing anti-Semitic attitudes both in the Ukrainian capital, Kiev, as well as in western Ukraine and the country’s eastern regions, where protesters have been campaigning in support of federalization since March.

“This is the desecration of synagogues and monuments related to Holocaust, attacks on Hasidic Jews and members of the Jewish community,” Brod told a RIA Novosti video link-up between Moscow and Tel Aviv.

The Jewish-Russian human rights activist said in most cases these crimes have been slurred over and used by protest groups and authorities in Ukraine to mobilize people and unite such radical groups.

With the lack of sound forces capable of uniting the interests of people in western and eastern Ukraine, “anti-Semitism and neo-Nazi incidents will continue” in the country, Brod said.

The activist criticized the United Nations, Organization for Security and Cooperation in Europe and the Council of Europe for failing to voice concerns over the rise of such attitudes in the country.

“The Ukrainian regime is absolutely encouraged by Western and US structures calling this an export of democracy,” Brod said, urging Russia to find allies in Israel which cannot stay indifferent towards the rise of the neo-Nazi attitudes.

“We should tell the truth about what is going on in modern Ukraine,” he said.

In February, the Ukrainian parliament backed by far-right movements ousted President Viktor Yanukovych and scheduled an early presidential election for May 25. Moscow has described the uprising in Kiev as an illegitimate fascist coup and a military seizure of power, which resulted in it taking steps to protect ethnic Russians in Ukraine, including the reunification with Crimea.