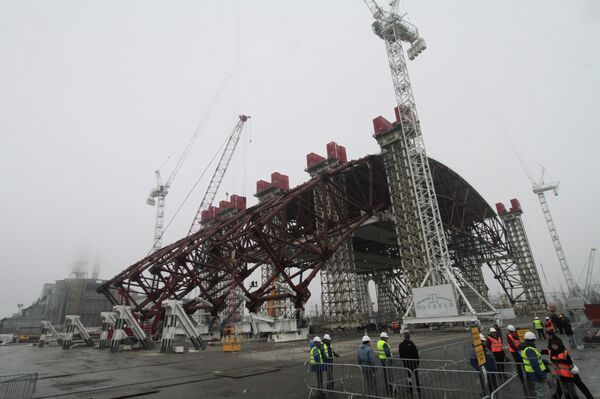 © RIA Novosti . Grigoriy Vasilenko
/
Go to the photo bank
Subscribe
The construction of a contamination shield at the damaged Chernobyl nuclear power plant could be delayed amid the ongoing political crisis in the country, the CEO of aid agency Chernobyl Children International (CCI) told the Irish Independent.

MOSCOW, April 23 (RIA Novosti) – The construction of a contamination shield at the damaged Chernobyl nuclear power plant could be delayed amid the ongoing political crisis in the country, the CEO of aid agency Chernobyl Children International (CCI) told the Irish Independent.

“What can never be forgotten is that the destruction caused by the deadly explosion at Reactor Number 4 at Chernobyl was triggered by the release of just 3 percent of the radioactive material in the plant, the remaining 97 percent of this enormous ticking time bomb of highly unstable nuclear material is still inside the crumbling Chernobyl complex,” Adi Roche said.

Work on the contamination shield, the largest of its kind in the world, was due to be completed by October 2015 but the turbulent political situation in Ukraine has cast doubt on the project’s progress.

Roche said that the work could be delayed by up to two years, adding that it is essential the international community understand the risks posed by the delay.

“Chernobyl is the old Soviet Union’s deadly legacy to Ukraine, and the world has very real reasons to be extremely concerned about the ongoing threat it poses, especially at a time of great instability and growing hostility between Ukraine and Russia,” Roche said.

An explosion at one of the power plant's nuclear reactors in 1986 led to the worst nuclear disaster in world history, affecting the lives of millions of people. Vast areas, mainly in the three Soviet republics of Ukraine, Belarus and Russia, were contaminated by the fallout from the critical nuclear meltdown, with some 200,000 people relocated following the accident.

Workers built a temporary shield over the damaged reactor soon after the disaster, called a sarcophagus. In 2010, work on the new shied started. The primary aim of the project, estimated to cost nearly €1.5 billion, is to prevent further leakage at the crippled reactor.