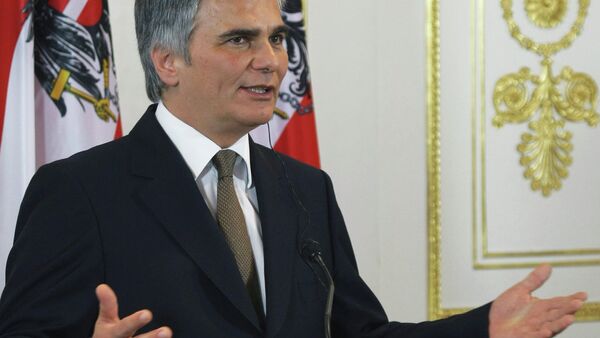 © Sputnik / Aleksey Nikolskyi
/
Go to the photo bank
Subscribe
Additional sanctions against Russia will not help solve the crisis in Ukraine, and would escalate the conflict instead of easing tensions, Austria’s Chancellor Werner Faymann said Wednesday in an interview with Reuters.

MOSCOW, April 23 (RIA Novosti) – Additional sanctions against Russia will not help solve the crisis in Ukraine, and would escalate the conflict instead of easing tensions, Austria’s Chancellor Werner Faymann said Wednesday in an interview with Reuters.

“I would fundamentally support what German Foreign Minister Steinmeier made clear again today: that conflict between Russia and Ukraine should not be inflamed by additional sanctions, but on the contrary, that de-escalation is what is required,” Faymann said, adding that the country’s finance officials are currently evaluating the effect of potential EU sanctions.

The EU, US and Canada last month imposed targeted sanctions, including asset freezes and visa bans, on a number of senior Russian officials and businessmen whom the West accuses of involvement in Crimea's reunification with Russia. A number of Western officials have since been calling for even tougher sanctions on Russia.

Moscow has repeatedly warned that talking in the language of sanctions is “inappropriate and counterproductive” and warned its Western partners about the “boomerang effect” that sanctions would have. A number of EU officials have spoken out against broader sanctions, because they might entail serious political and economic consequences for EU member states.

In February, the Ukrainian parliament backed by far-right movements ousted President Viktor Yanukovych, amended the constitution and scheduled an early presidential election for May 25. Moscow has described the uprising in Kiev as an illegitimate fascist coup and a military seizure of power, which resulted in it taking steps to protect ethnic Russians in Ukraine, including the reunification of Crimea.