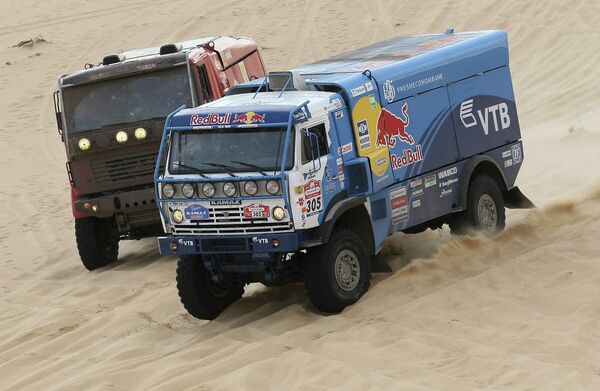 Formula One’s upcoming Russian Grand Prix in Sochi caused an unusual casualty Tuesday as the organizers of Russia’s highest-profile rally said it had forced their event to be called off.

MOSCOW, April 22 (R-Sport) - Formula One’s upcoming Russian Grand Prix in Sochi caused an unusual casualty Tuesday as the organizers of Russia’s highest-profile rally said it had forced their event to be called off.

The Silk Way rally for off-road cars and trucks was launched in 2009 as an annual competition modeled on the Dakar Rally and has become one of the largest events of its kind in the world.

The 2014 edition was scheduled to cross Russia and Kazakhstan over 3,000km and eight days in July, but organizers said they had decided to cancel it to allow the event’s government backers to focus on promoting October’s F1 Grand Prix in Sochi.

“The country … in several months’ time is to host another strategically important motorsport project and take on the first Formula One race in Sochi,” Silk Way organizing committee head Semyon Yakubov said in a website statement.

“Being a state project and unreservedly acknowledging the priorities of sport, the organizing committee of the Silk Way rally has postponed the 2014 competition to next year.”

The decision was taken “with the aim of balancing the load on those structures tasked with organizing large-scale events,” he added.

The Silk Way rally is widely seen as a key test for teams and drivers targeting victory in the Dakar Rally, especially Russia’s dominant Kamaz truck racing team, which has won its class in four of the five editions of the Silk Way to date.

Kamaz team manager Vladimir Chagin, a seven-time Dakar winner as a driver, said the decision to cancel the 2014 Silk Way was a blow to the sport of cross-country rallying.

"The Silk Way was obviously very necessary to all the teams that compete in the Dakar," he told R-Sport. "For our team it's not just a training process, checkup and equipment test, but also a way to reach our Russian fan, a chance for our spectators to see the team and the vehicle not just on television, but in the flesh."

As a result of the cancelation, the Rallye du Maroc in October will be the only opportunity for top teams to prepare for January's Sakar, Chagin added. He suggested that F1 had played a part in reducing the financial viability of the Silk Way.

"It hasn't been possible to finance the race for this year because in the country this year there are other big competitions - the Olympics, Formula One being held for the first time," he said. "The financial strain is very high."

Among the previous winners in the off-road class of the Silk Way are former world rally champion Carlos Sainz and ex-F1 driver and Dakar winner Jean-Louis Schlesser.