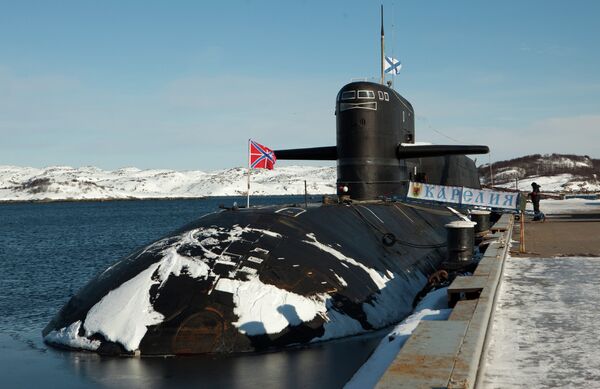 Russia will build a unified network of naval facilities on its Arctic territories to host advanced warships and submarines as part of a plan to boost protection of the country’s interests and borders in the region, President Vladimir Putin said Tuesday.

MOSCOW, April 22 (RIA Novosti) – Russia will build a unified network of naval facilities on its Arctic territories to host advanced warships and submarines as part of a plan to boost protection of the country’s interests and borders in the region, President Vladimir Putin said Tuesday.

“We need to strengthen our military infrastructure. In particular, to create in our part of the Arctic a unified network of naval facilities for new-generation ships and submarines,” the president said at a meeting of Russia’s Security Council.

He said that Russia should boost security at its Arctic borders.

Putin ordered the military in December to boost its presence in the Arctic and complete the development of military infrastructure in the region in 2014.

The Defense Ministry has already announced plans to reopen airfields and ports on the New Siberian Islands and the Franz Josef Land archipelago, as well as at least seven airstrips on the continental part of the Arctic Circle that were mothballed in 1993.

The military is also planning to form a new strategic military command in the Arctic, dubbed the Northern Fleet-Unified Strategic Command, by the end of 2014.

Putin reiterated that Russia is actively developing this promising region and should have all means for protection of its security and economic interests there.

“The oil and gas production facilities, loading stations and pipelines must be well protected from terrorists and other potential threats,” Putin said.

The Russian president called on experts to defend Russia’s territorial claims to the Arctic shelf, just like they did during this year’s successful claim to 52,000-square-kilometer area in the Sea of Okhotsk off Japan.

“Our experts must act similarly, for bilateral as well as multilateral consultations with Arctic countries’ governments, and safeguard each parcel of the continental shelf in the Russian part of the Arctic, and marine areas,” Putin said.

Moscow filed its claim to a part of the Artic continental shelf including the Lomonosov and Mendeleev Ridges in 2011, but the UN Commission on the Limits of the Continental Shelf said that it needed further scientific backing.

Scientists have to prove that the underwater ridges are extensions of the Eurasian continent, thus linked to Russia’s territory. The shelf, which is believed to hold some five million tons of hydrocarbon reserves, is a lucrative resource-rich zone.

In line with these territorial ambitions, Putin believes it is necessary to create a separate public body for the implementation of the Russian policy in the Arctic.

“We do not need a cumbersome bureaucratic body, but a flexible operationally working structure that will help better coordinate ministries and departments’ activities, regions and business,” Putin said.

The president tasked the government with ensuring that Russia’s goals in the Arctic are being solved and receive due financing.

“We are going to continue to invest serious funds in the Arctic, to solve tasks needed for social and economic investment of the Arctic regions, to strengthen security as demanded by our long-term national interests,” he said.