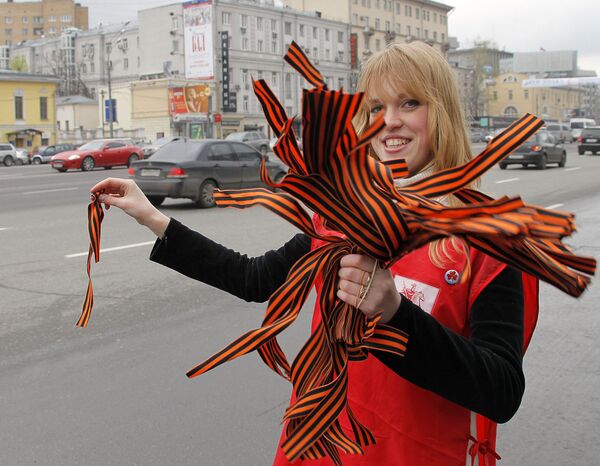 The tenth anniversary St George's Ribbon national event, uniting millions of people in many countries, will start on April 24.

The tenth anniversary St George's Ribbon national event, uniting millions of people in many countries, will start on April 24. This year the event will be run jointly by the Rossiya Segodnya International Information Agency and the Student Community with the support of over 100 media outlets all over the world. To mark Russia's victory in the Great Patriotic War and to symbolise future victories, St George's Ribbon will go to space, military film festivals, song and graffiti festivals, photo exhibitions, flash mobs and a bicycle quest.

St George's Ribbon has received a new lease of life lately," Rossiya Segodnya Director General Dmitry Kiselev said. "It has become a sign of people who support the values of the Russian world. It helps many of our brethren in their fight for human dignity and honour in the loftiest sense of these words. Finally, this ribbon is a new symbol of our community."

"The traditional film and graffiti festivals will take place in Moscow. A photo exhibition entitled ‘St George's Ribbon' will be held in two central pedestrian streets. Monitors for the photo display "We remember! We are proud!" and video terminals for recording greetings to war veterans will be also installed there," Ms Volchenkova said.

A news conference marking the start of the patriotic event will be held at the Rossiya Segodnya International Multimedia Press Center on April 24. It will be attended by Rossiya Segodnya Director General Dmitry Kiselev, Head of the Federal Space Agency Oleg Ostapenko, Minister of Culture Vladimir Medinsky and Director of the Student Community Olesya Volchenkova. The news conference will feature a live video link with the International Space Station where St George's Ribbon was sent on the eve of the event.

St George's Ribbon event has been held every year since 2005. Ahead of  Victory Day, millions of people in Moscow, throughout Russia as well as in the CIS and  other countries, display this symbol of remembrance and military glory on their clothes and cars. The ribbon can be seen in the streets of hundreds of cities in Russia, other CIS cities, Europe, Asia and America. For details visit the event's website.