Medvedev Says Moscow Will Turn to Courts, WTO in Response to Limits on Russian Goods 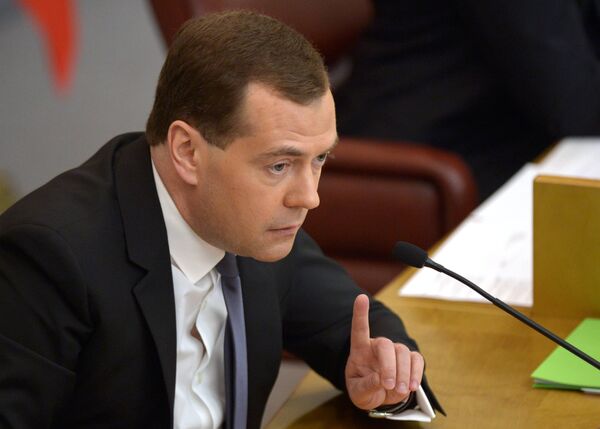 A response is needed on the introduction of limitations of Russian goods through courts and the World Trade Organization (WTO), Russian Prime Minister Dmitry Medvedev said Tuesday.

“We have been ‘kept in the hallway’ for 17 years, where we have persistently proven that we are worthy of entering the world trade society and meet its standards. Now we have the full right to demand the set rules from other WTO member nations are followed in regard to Russian goods,” Medvedev said during his annual report before the country’s lower house of parliament.

“We don’t have to be shy here. If this is founded and legal, we can ‘show our teeth,’ and we will turn to the courts, including to the Dispute Settlement Body within the WTO,” Medvedev said.

Limitations on Russian goods can potentially be imposed by the EU as part of the European third energy package. Introduced in 2009, the package is the EU's attempt to liberalize regional electricity and gas market and to protect it from vertical integration.

According to the European Commission, this will boost competition and allow new players to enter the market and decrease energy prices.

Russia is against the move, saying that the European Commission tries to control the market and make Russian energy giant Gazprom switch its long-term contract with Russian gas to so-called spot rate.

Gazprom believes the step is against the company, the major supplier of pipeline gas to Europe.