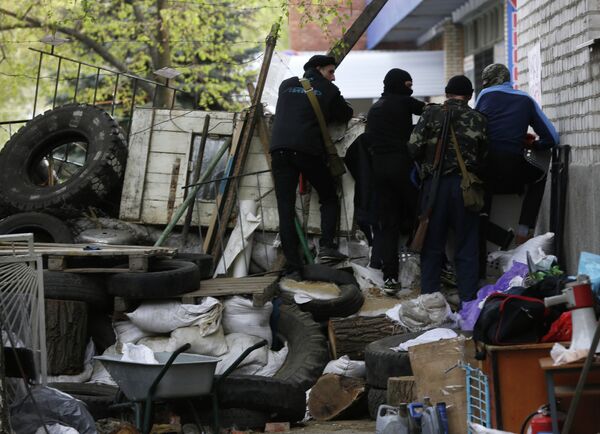 The people’s militia in the eastern Ukrainian city of Slaviansk have arrested Euromaidan activist Irma Krat, the leader of the pro-federalization protesters said Monday.

According to Vyacheslav Ponomaryov, Krat came to Slaviansk under the guise of a journalist and was arrested Sunday on suspicion of torture and espionage as part of the Right Sector nationalistic movement.

She has been detained in the local Ukrainian Security Services building, which was earlier seized by the pro-federalization activists.

On Sunday, the Ukrainian Interior Ministry confirmed that three people, including two local citizens, were killed and three others were injured in an overnight shootout in the city. The insignia of Right Sector was reportedly found at the scene of the attack.

The Russian Foreign Ministry has condemned the attack as a “provocation,” adding that it demonstrated the Kiev regime's reluctance to disarm nationalists and extremists.

Federalization supporters in Kharkiv, Donetsk, Gorlovka, Slaviansk and Kramatorsk have refused to recognize the legitimacy of the current Ukrainian government and have been holding rallies since last month. In response, Ukrainian interim authorities have launched a special operation to crack down on the protests. Moscow has denounced Kiev's actions.