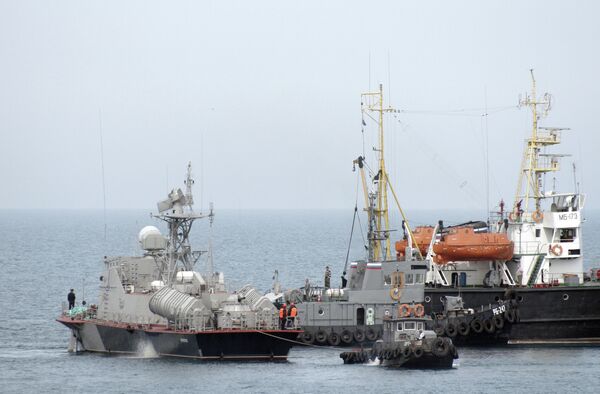 Russia has hauled back to Ukraine 13 out of 70 warships and support vessels of the country’s navy that were stationed in Crimea, a local official told RIA Novosti Monday.

SEVASTOPOL, Russia, April 21 (RIA Novosti) – Russia has hauled back to Ukraine 13 out of 70 warships and support vessels of the country’s navy that were stationed in Crimea, a local official told RIA Novosti Monday.

The Ukrainian ships are being withdrawn from Crimea under agreements between the Russian and Ukrainian militaries. Russian tugboats haul them to neutral waters, where they are transferred to Ukrainian command. Some 60 ships of the Ukrainian Navy still remain in Crimea.

Earlier, media reports relayed that the administration of acting President of Ukraine Olexander Turchynov said that all Ukrainian ships and vessels had left Sevastopol and the Donuzlav Bay and headed for Odessa.

A RIA Novosti correspondent in Sevastopol said the vessels, including the country’s only remaining submarine Zaporizhzhia, are still moored in the Bay of Sevastopol with no tugboats to be seen. Crimea, which rejoined Russia last month after 60 years as part of Ukraine, previously hosted several Ukrainian military bases and the headquarters of the country’s Black Sea fleet.

Those Ukrainian servicemen who declined to join the Russian armed forces have been withdrawing from the peninsula in recent weeks. Russia vowed to return Ukrainian military vehicles, vessels and equipment to Ukraine, but the transition has been put on hold recently amid fears that they might be used against pro-federalization protesters in the country’s eastern regions.

Previous reports said that 389 units of military equipment, including eight helicopters and three warships, have already been transferred to Ukraine.