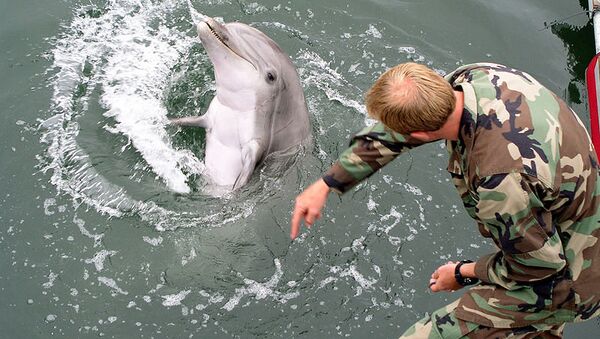 US military-trained dolphins and sea lions will participate in upcoming NATO military exercises in the Black Sea, the Russian Izvestiya newspaper reported Monday.

The paper, citing a spokesman for the US Navy’s marine mammals program, said some 20 dolphins and 10 sea lions will participate in exercises.

The exercises will test new equipment designed to "disorient enemy sonars, while sea lions and dolphins are looking for mines and military divers," the newspaper wrote.

The exercises will be held under the marine mammals’ training program, which trains animals to protect ships and harbors and detect mines.

"In addition, we plan to test new armor for dolphins developed by a specialized research center based in the University of Hawaii," the newspaper said, citing spokesman Tom LaPuzza.

The animals are to be airlifted to Ukraine. This will be the first NATO drill to involve military dolphins. The US military now has more than 100 bottlenose dolphins, California sea lions and beluga whales, according to LaPuzza.

The exercises are planned to last no longer than two weeks. Under an international agreement, the maximum permitted duration of stay for countries that do not have access to the Black Sea is 21 days.

It was previously announced that Russia will also use dolphins in its Black Sea navy missions. Military dolphins and sea lions that were undergoing training for the Ukrainian Navy before the Crimean Peninsula was reunited with Russia last month have been transferred to the Russian Navy.