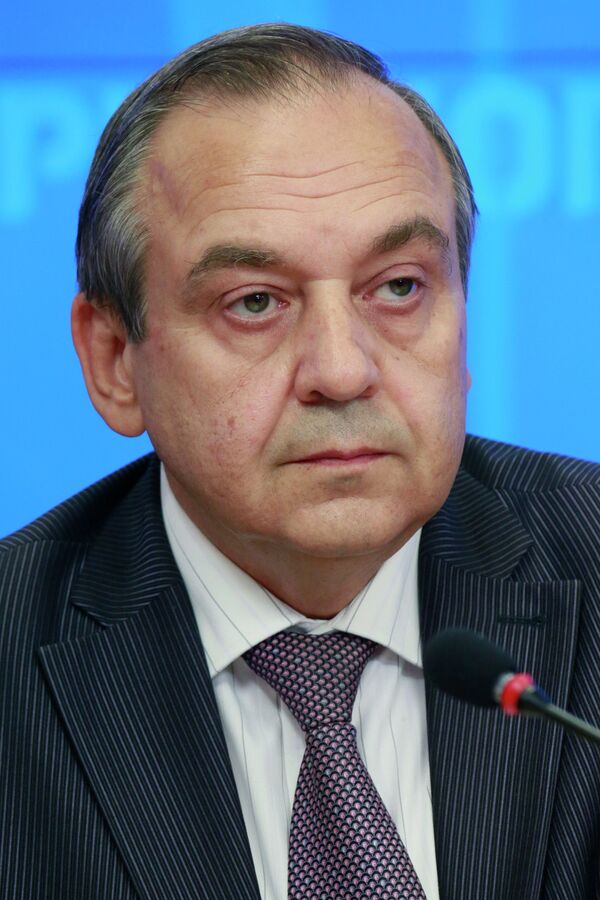 © RIA Novosti . Alexander Natruskin
/
Go to the photo bank
Subscribe
Western countries are fighting a “total war” aimed at the complete destruction of the Commonwealth of Independent States (CIS) and expulsion of the major members of the organization, the deputy head of the Russian agency on CIS affairs said Friday.

MOSCOW, April 18 (RIA Novosti) – Western countries are fighting a “total war” aimed at the complete destruction of the Commonwealth of Independent States (CIS) and expulsion of the major members of the organization, the deputy head of the Russian agency on CIS affairs said Friday.

“Within the context of this policy they are trying to give a final blow to the Commonwealth of Independent States,” Georgy Muradov said during a session on human rights in Ukraine at the Russian Civic Chamber.

“They are fighting a total war against the CIS, seeking its disintegration.”

He added that “key members of the organization are being expelled” in an effort to eliminate Russia’s allies.

Muradov added that the Russian agency Rossotrudnichestvo had recently put forward a motion to enhance cooperation with compatriots living in CIS countries. He specified that the Ukrainian scenario might be repeated if questions related to the protection of Russian citizens living abroad were not resolved.

Kiev earlier announced that it was abandoning its post as this year's rotating CIS head, thus paving the way for Minsk to take the leadership role.

The Russian Foreign Ministry condemned the move, saying that it will affect millions of Ukrainians. Foreign Minister Sergei Lavrov called Ukarine’s potential withdrawal from the organization an anti-Russian campaign of propagandistic nature.

“We are not keeping anyone in the CIS by force but this decision was made not for the benefits of the Ukrainian population but to stage another anti-Russian campaign of propagandistic nature. I don’t doubt that,” Lavrov said.