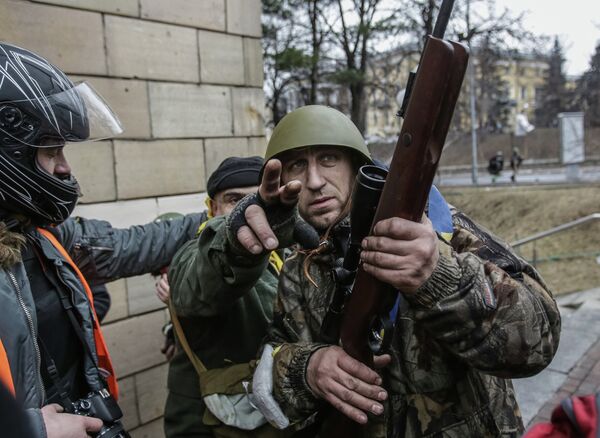 © RIA Novosti . Andrey Stenin
/
Go to the photo bank
Subscribe
The disarmament of irregular militant groups in Ukraine is a task for the authorities in Kiev, OSCE Secretary General Lamberto Zannier told RIA Novosti Friday, outlining a roadmap devised at talks in Geneva on Thursday.

MOSCOW, April 18 (RIA Novosti) – The disarmament of irregular militant groups in Ukraine is a task for the authorities in Kiev, OSCE Secretary General Lamberto Zannier told RIA Novosti Friday, outlining a roadmap devised at talks in Geneva on Thursday.

“It should be done by the Ukrainians. It’s a law and order issue, and the relevant Ukrainian institutions should do it,” he said, explaining that the objective is complicated and “has to be part of a broader process where the central part is dialogue.”

Zannier's assessment of Thursday's meeting on the crisis in Ukraine was "really positive."

"One of the issues we saw in the OSCE in recent weeks was a deep division in the international community over Ukraine, with various aspects at the center of this difficult debate. Now we have the opportunity to develop a roadmap for the engagement of the OSCE, and also for the future of Ukraine that is shared by key players,” he said commenting on the meeting.

He added that responsibility lies with Kiev to follow through on the plan, but “there is full support in the implementation of these steps.”

Carrying out dialogue would form the primary task of the OSCE Special Monitoring Mission to Ukraine, Zannier explained.

“Their role is going to be the role of facilitation. We are there to open up bridges and to encourage dialogue,” he added, saying that a round table proposed by Russian President Vladimir Putin in a personal meeting with the OSCE Secretary General “is a very interesting idea” and the mission “could help organize that.”

The Special Monitoring Mission, which was launched by 57 OSCE participating states, deployed to Ukraine two weeks ago. Over a hundred OSCE observers currently work in 10 Ukrainian cities, including Kiev, Donetsk, Kharkiv and Luhansk. The current plan to increase the number of monitors to 300 may be extended further, but Zannier said he hopes there will be no such need.

Russia, the US, the EU and Ukraine adopted the joint statement on the de-escalation of the Ukrainian crisis at the four-party talks in Geneva on Thursday. The roadmap called for all illegally armed groups to lay down their arms and a wide amnesty for detained protesters.

Russian Foreign Minister Sergey Lavrov said the most important result of the meeting was that all sides agreed the crisis in Ukraine should be resolved by Ukrainians themselves.