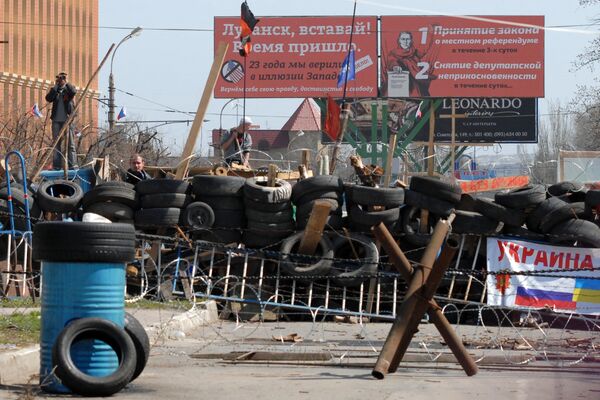 Several hundred people continue to rally in support of federalization for Ukraine at a regional government building in Donetsk. Among the protesters are activists who have been on permanent watch outside the occupied building, as well as citizens who came there to support them, the correspondent reported.

The organizers of the rally have been addressing protesters from a stage erected nearby. The situation at the government building is peaceful as of now.

Anti-government protest are also continuing in another eastern city, Luhansk.

Dozens of people are rallying at a Security Service office. The protesters are demanding Ukraine's federalization and an independence referendum, saying that they will be taking their stand “until the end.”

Luhansk residents are providing protesters with food. In overall the situation in the city is peaceful.

Russia, Ukraine, the United States and the European Union met in Geneva on Thursday where they agreed to de-escalate the crisis in Ukraine’s southeastern areas. Mediators called on the warring parties to disband illegally armed groups, surrender all occupied government buildings and remove protesters from streets and squares. They also urged the Kiev regime to pardon demonstrators that had not committed felonies.

Eastern Ukraine has been swept by rallies since last month. Federalization supporters in Kharkiv, Luhansk, Donetsk, Gorlovka, Slaviansk and Kramatorsk have refused to recognize the legitimacy of the current Ukrainian government and are urging interim authorities to hold referendums similar to the one held in Crimea last month, which led to the republic’s reunification with Russia. In response, Ukrainian authorities started a special operation to crack down on pro-federalization activists in eastern regions of the country.