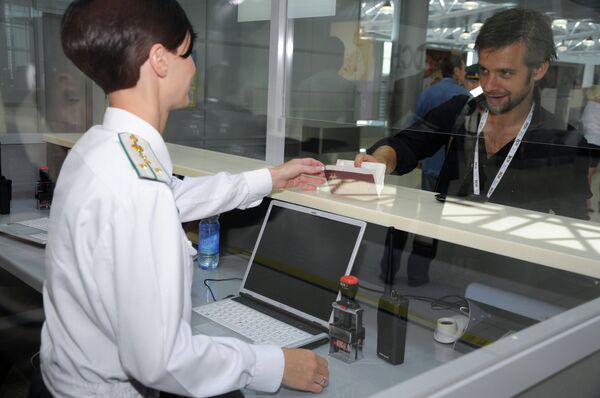 The Ukrainian State Border Guard Service confirmed Thursday that Russian males aged 16-60 have been banned from entering the country.

Russia’s largest airline Aeroflot earlier announced it had received an official letter from Ukrainian authorities notifying the company of the severe restrictions.

The exceptions to the ban include passengers traveling with relatives who are women or children, or those who have documents confirming an invitation from close relatives or serious illness or death in the family, the company said.

A spokesman for the service told RIA Novosti that "these temporary measures apply, primarily, to healthy males who could somehow influence the situation in eastern Ukraine."

"Ukrainian females aged 20-35 years who are registered as residents of the Autonomous Republic of Crimea and the city of Sevastopol will be allowed to enter Ukraine only after special verification," Aeroflot added.

Aeroflot recommended that passengers who belong to the restricted categories temporarily refrain from trips to Ukraine, adding that the company would issue refunds to passengers now banned who have already booked travel.

The bans do not apply to flight and cabin crew, as well as to engineering and technical personnel, the airline said.

The entry ban is yet another folly by Ukrainian authorities that will leave the country’s economy in ruins and cause a revolt among its population, Deputy Chair of the Russian Civic Chamber Vladislav Grib told RIA Novosti.

Since last month, pro-federalization rallies have swept across eastern Ukraine, which has a large proportion of Russian speakers.

Federalization supporters in Kharkiv, Donetsk, Gorlovka, Slaviansk and Kramatorsk have refused to recognize the legitimacy of the current Ukrainian government.

The protestors have urged interim authorities in Kiev to hold referendums similar to the one held in Crimea last month, which led to the republic's reunification with Russia.