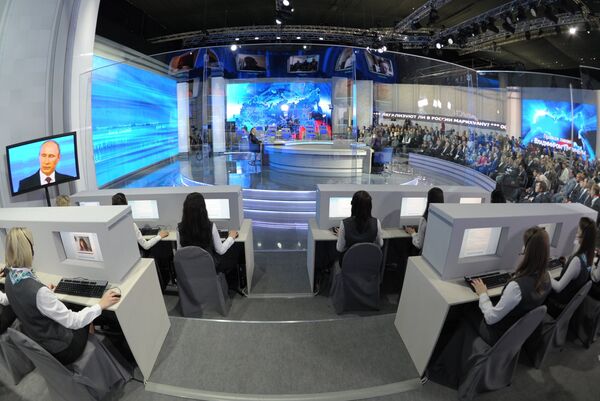 MOSCOW, April 17 (RIA Novosti) - The Russian Defense Ministry has placed a 5-billion-ruble ($140-million) order at a Crimean shipyard, Russian President Vladimir Putin said during a live Q&A session with the public on Thursday.

“The Ministry of Defense has placed an order at one of the shipyards for 5 billion rubles,” Putin said.

He said that the better amount of modern Russian ships and support vessels would be transferred from Novorossiisk to Sevastopol.

In March, Russia approved an initial financial aid package to support Crimean economy. Russian Finance Minister Anton Siluanov said that Moscow would spend up to 243 billion rubles ($6.82 billion) in Crimea this year, to be financed from the budget reserve.

The Ukrainian economy has been hard hit by the ongoing political crisis following the unconstitutional seizure of power in February by the country's new leadership, which includes a number of far-right ultranationalists in key positions.

Crimea, a predominantly ethnic Russian region, rejected the legitimacy of the new government and moved to rejoin Russia after the government in Kiev introduced measures aimed against Russian-speakers in the country.