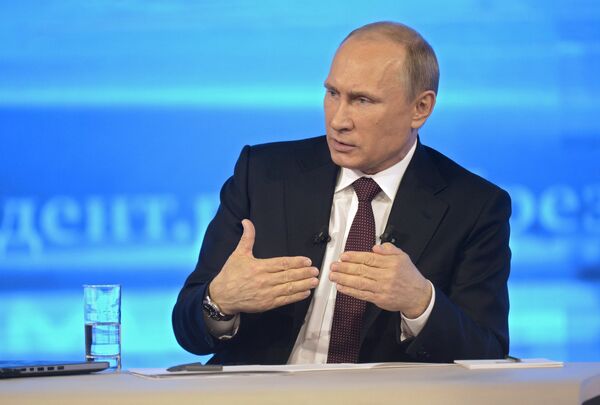 Russia is not afraid of NATO expansion, Russian President Vladimir Putin said during a live Q&A session with the public on Thursday.

MOSCOW, April 17 (RIA Novosti) - Russia is not afraid of NATO expansion, Russian President Vladimir Putin said during a live Q&A session with the public on Thursday.

“We will choke them all. What are you afraid of?” Putin said while answering a question to the expansion of NATO.

NATO’s Rasmussen pledged on Wednesday to step up patrols and boost its military presence along the alliance’s eastern border in Europe, citing Russia’s alleged involvement in the Ukrainian crisis. “We will have more planes in the air, more ships on the water, and more readiness on the land," Rasmussen said in Brussels.

This move has come as another sign that the alliance was tightening its grip on Eastern Europe where it is already running air-policing and surveillance missions over Poland, Romania and the Baltic trio.

NATO member states earlier released separate announcements saying they were suspending military cooperation with Russia after Crimean residents voted overwhelmingly to join Russia in a referendum, which the West considers illegitimate and Russia says is in line with the UN charter and the international law.

According to Russian experts, the suspension of military cooperation with NATO will do no harm to Russian interests or security.

Russia has vociferously opposed any further eastward expansion by NATO, particularly by former Soviet republics on its borders. Vladimir Putin said last week Moscow was open to further cooperation with NATO, but remained opposed to the organization’s presence in historic Russian territories.