Putin Jokes on Possible Reunification of Alaska with Russia: Who Needs It? 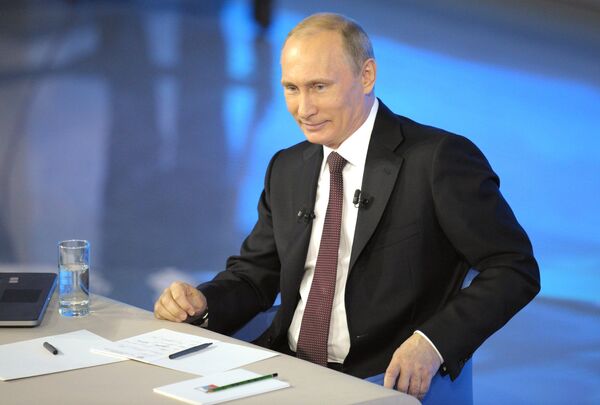 Alaska was part of Russia until 1867 and was sold to the United States for $7.2 million in gold.

“We are a northern country, 70% or our territory belongs in the Northern and Extreme Northern regions. Is Alaska really in the Southern Hemisphere? It’s cold there, too. Let’s not get hot-headed,” Putin said during a live Q&A session with the public on Thursday.

He said he knows of the popular Russian nickname of Alaska after the Crimean reunification, which sounds like “ice-cream” (Crimea in Russian is pronounced like Cream).

In response to the posed question, Putin said: “Who needs Alaska?”

Over 42,000 people have signed a petition calling for the secession of Alaska from the US and the state's reunification with Russia. The petition, available on the White House website, opened on March 21. "Alaska Back to Russia" partition encourages a vote on secession, citing historic travels of Russian explorers to Alaska, as far back as the crossing of native Siberians across the Bering land bridge over 10 thousand years ago.

Similar petitions have been submitted by other US states, including Texas, Georgia, Florida etc. Obama administration turned Texas petition down saying that while "no one disputes that our country faces big challenges," Americans needed to work together "to find the best way to move forward."