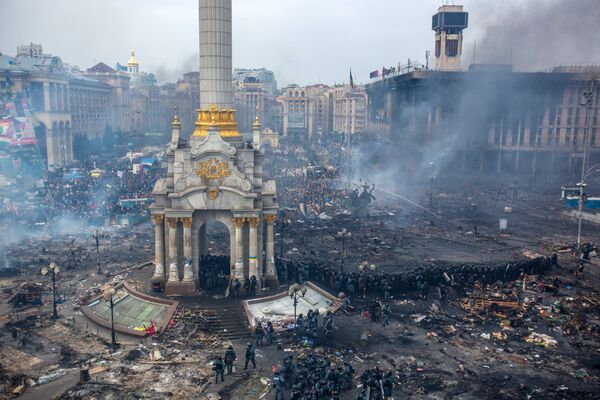 "The CIA has long been involved in fomenting unrest and instability in Ukraine going back to the early 1990s, following the end of the Cold War, as a way of pressuring Russia in a larger geopolitical context," Finian Cunningham, an international affairs expert, author and media commentator told RIA Novosti Tuesday while commenting on the recent visit of CIA Director John Brennan to Ukraine.

"In Ukraine the CIA staged two coup d'états - the last one was when Yanukovich said he wouldn't sign the association agreement with the EU," according to the government consultant and publicist Christoph Horstel from Germany.

"And they thought that Yanukovich was in their hands, but he went to Russia. This led the US to use the crazy Nazi groups in the country, which they had cultivated carefully beforehand," Horstel told RIA Novosti.

"The CIA was involved in agitating the so-called Orange Revolution of 2004 in Ukraine. A few months ago, US State Department official Victorial Nuland made an unintended disclosure that Washington has ‘invested $5 billion' in ‘promoting democracy' in Ukraine since the early 1990s," Finian Cunningham said.

"By ‘promoting democracy' Nuland is cynically referring to CIA covert ops of destabilizing society through its myriad front organizations, such as the National Endowment for Democracy, USAID, Soros Open Society, and the Heritage Foundation," he added.

Brennan's visit to Ukraine coincided with Kiev's decision to crack down on pro-federalization protests in eastern cities of Ukraine. Ukrainian troops have moved towards a number of cities in Eastern Ukraine to attack the protesters.

"Kiev went ahead in attacking the opposition right when Brennan visited Ukraine, not only in Slaviansk, but also in other protesting cities," Horstel said.

Russian Foreign Minister Sergei Lavrov called the interim government's decision to use force against the protesters an extremely dangerous development, and said in a statement that the US has not provided any clear explanation for the urgent visit of the CIA director to Kiev.

The Kiev junta has little control over the protests that flared all across eastern and southeastern Ukraine in the past last month. "Those protests are morally and legally entitled because of the illegal power grab in Kiev by the Western-backed fascists of Maidan," Cunningham told RIA Novosti.

"As the US-backed junta in Kiev struggles to maintain a semblance of order over the rest of Ukraine, it is highly significant that CIA chief John Brennan arrived in person in Kiev over the weekend. His mission is obviously to try to shore up the rattled ranks of the junta," he added.

Moreover the methods and tactics used in Ukraine resemble those employed in Afghanistan, Horstel noted.

"The CIA used the same methods in Afghanistan," he said. "In Ukraine, they use the Nazis who the CIA is sure are easy to handle as they are very few and have nobody else to turn to."

The CIA involvement in Ukraine's domestic affairs alarmed Russia, and the experts said that mass shootings in February in Kiev blamed on Yanukovich by the Western media that triggered his ousting, were actually organized by the CIA.

"There is sound evidence that the CIA was involved in orchestrating the mass shootings as a dirty trick campaign for that coup purpose," Cunningham said.

Russia has repeatedly warned the West against interfering in Ukraine's internal affairs, as well as expressing concerns over the use of mercenaries in Ukraine. Lavrov has also railed against attempts by the West to justify the actions of the neo-Nazis and their accomplices, calling on the US and EU to condemn the extremists.