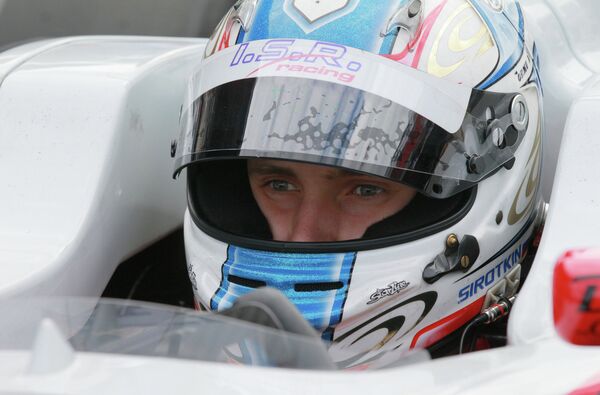 © RIA Novosti . Vitalii Belousov
/
Go to the mediabank
Subscribe
International
India
Africa
Sauber Formula One test driver Sergei Sirotkin and Indy Car rookie Mikhail Aleshin are among dozens of mostly Russian auto racers whose careers could be threatened by U.S. and European sanctions related to the Ukraine crisis, an organization that backs them financially said Monday.

MOSCOW, April 14 (R-Sport) - Sauber Formula One test driver Sergei Sirotkin and Indy Car rookie Mikhail Aleshin are among dozens of mostly Russian auto racers whose careers could be threatened by U.S. and European sanctions related to the Ukraine crisis, an organization that backs them financially said Monday.

The racers are backed by the SMP Racing project, which was set up by billionaire Boris Rotenberg, a childhood friend of Russian President Vladimir Putin who was included in U.S. sanctions last month as a member of Putin’s so-called “inner circle.”

SMP Racing says its European accounts have been frozen as a result of U.S. and EU sanctions imposed after Crimea’s absorption into Russia last month, and that this could endanger promising racers’ careers by depriving them of financial support.

In a statement, the organization branded the sanctions “political blackmail,” adding: “We ask Europe and the U.S. to listen to the voice of reason by removing the limit on Russian athletes’ participation in international competitions.”

SMP Racing states on its website that it supports 47 racers including Sirotkin, 18, who tested for Sauber in Bahrain last week, and Aleshin, 26, who finished sixth in Long Beach on his Indy Car debut Sunday. Also included is Finnish former F1 racer Mika Salo, 47, now competing in endurance racing.

Rotenberg himself is also part of the program, having driven a Ferrari in two European Le Mans Series events last year with SMP Racing sponsorship.

SMP Racing is Aleshin's main sponsor in Indy Car, but the organization's sports director Sergei Zlobin told R-Sport that Aleshin's career had yet to be affected by the sanctions. However, SMP Racing-backed racers in European series could be left unable to compete, Zlobin said.

"I feel like hoping that all these disturbances don't affect the first Russian driver in [Indy Car]," Zlobin said of Aleshin. "The problems that our European office is facing in connection with the impossibility of using funds in the account will result in our drivers not being able to take part in European championships."

Zlobin added that Europe-based drivers could soon be unable to meet their equipment costs or pay participation fees to compete.

The organization uses the branding of SMP Bank, a major Russian financial institution co-owned by Rotenberg, his brother Arkady Rotenberg and Yuri Kovalchuk. All three were hit with U.S. Treasury sanctions last month.