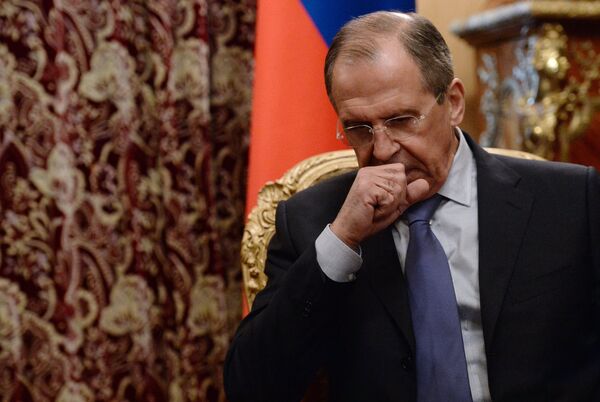 “We are being accused that we have some kind of special agents there. There aren’t any. We don’t have any troops there either. We have no military personnel there or our agents,” Lavrov said during an interview on the Rossiya TV channel.

Lavrov did confess that Russian individuals could be taking part in the protests, demanding greater autonomy for their regions within Ukraine.

“There are Russian citizens [there], and some have been shown on television programs. A guy from Volgograd came, someone from somewhere else. But there’s nothing surprising in this because there were [all kinds of people] on Maidan,” Russia’s top diplomat said.

He said that Moscow has no plans of taking over southeastern regions of Ukraine as such action would contradict Russia’s interests.

“We don’t have any wishes like that. That contradicts the root interests of the Russian Federation,” Lavrov said. “We want Ukraine to be intact within its current borders, but in full respect of the regions.”

According to the minister, Ukrainian authorities need to realize their responsibility before their citizens and take into consideration the interests of all regions, including their desire to live in a federative state.

“We are convinced that the main thing that should be done in Ukraine at the moment is to hold a constitutional reform, involving all regions, and free, fair and general elections, so that the regions themselves are able to elect their own legislatures and governors.”

Protesters have been rallying for federalization across Ukraine’s eastern and southeastern regions of Donetsk, Kharkiv, and Luhansk, calling for Crimea-style referendums on the status of their regions within Ukraine.

The independence drive was inspired by the referendum in Crimea held on March 16, when more than 96 percent of the population voted for reunification with Russia. The West condemned the move and blamed Moscow for destabilizing the situation in Ukraine.

Russia insists on reconciliation dialogue involving all regions and constitutional reforms to make Ukraine a federation.