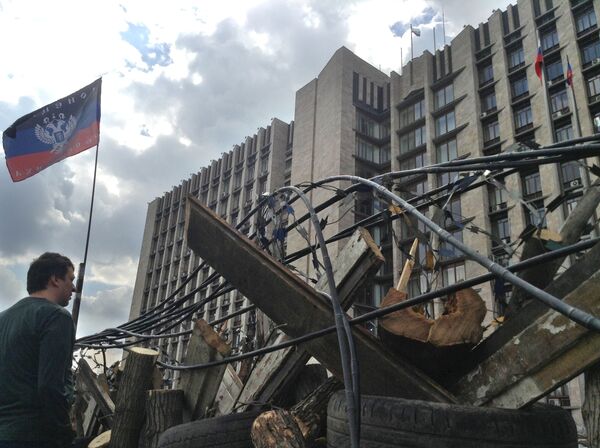 © RIA Novosti
/
Go to the mediabank
Subscribe
International
India
Africa
A ragtag band of US mercenaries, Ukrainian National Guard soldiers, and fighters from the radical Right Sector movement have arrived in the eastern Ukrainian city of Donetsk to raid a building occupied by anti-government protestors, a leader of a local militia group told RIA Novosti on Thursday.

DONETSK, Ukraine, April 10 (RIA Novosti) – A ragtag band of US mercenaries, Ukrainian National Guard soldiers, and fighters from the radical Right Sector movement have arrived in the eastern Ukrainian city of Donetsk to raid a building occupied by anti-government protestors, a leader of a local militia group told RIA Novosti on Thursday.

“About a hundred people from the National Guard are housed at the Donetsk airport,” said Sergey Tsyplakov, the deputy director of a local group called the People’s Militia of the Donbas.

“Around a hundred Right Sector thugs are also in the city, as well as a hundred employees from a private US military company operating under contract with the Kiev junta,” he added.

“In total, there are around 300 professionals and well-trained and motivated fanatics,” Tsyplakov said. “This is a major force, but we are ready to fight.”

Pro-federalization protesters have built three lines of barricades in front of the main entrance of the Donetsk regional administration building. The defensive fortifications – decorated with Russian and regional flags and anti-fascist slogans – are made from pieces of furniture, barbed wire and car parts.

Around a hundred people spent the night near the barricades prepared to defend against an expected attack by government forces. The protesters enforced the barricades with blocks they removed from a nearby park’s stone paving, and piled stones inside the defensive perimeter. People were burning bonfires to stay warm in front of the barricades and singing songs.

"Representatives of Kiev have repeatedly told us to lay down the firearms which, in their opinion, we possess. However, neither I, nor anyone else, have seen any weapons here. We are defending ourselves by impromptu means," Tsyplakov said.

Donetsk police have refused to disperse the protesters occupying the building.

Pro-federalization supporters occupied several government buildings in the city on Monday. They declared the formation of an independent “people’s republic” and announced plans to schedule a referendum by mid-May on declaring independence and joining Russia. Similar events took place in nearby Kharkiv, the country's second largest city.

Ukrainian acting Interior Minister Arsen Avakov told journalists Wednesday that a “special police task force” had already arrived in Donetsk and Kharkiv from western regions of Ukraine and was ready to take them under control within 48 hours, by force if necessary.

The minister's threat came in defiance of warnings by Moscow and international experts that a violent crackdown on the demonstrators – who are seeking increased local autonomy – risked escalating the crisis and plunging the country into a civil war.