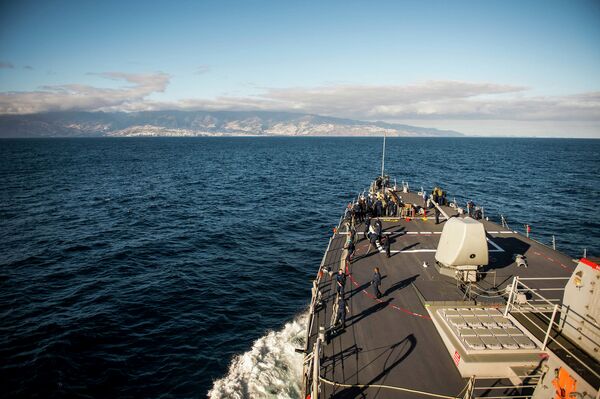 The US guided-missile destroyer Donald Cook and French intelligence warship Dupuy de Lôme entered the Sea of Marmara on Thursday on their way to the Black Sea, the Turkish newspaper Jum Hurriyet reported.

The newspaper published a video online showing the US warship passing through the Dardanelles Strait early Thursday morning, accompanied by Turkish coastguard vessels.

The destroyer, equipped with the Aegis fire control system, entered the Sea of Marmara an hour later and will stay in the Black Sea for 21 days, according to the paper. The French intelligence ship followed an hour behind the US destroyer.

The USS Donald Cook is the third US warship sent to the Black Sea recently. In February, the US dispatched the missile frigate USS Taylor into the waters of the sea to provide security for the Olympic Games in Sochi.

Last month, the USS Truxtun passed through the Bosphorus to enter the Black Sea to conduct joint exercises with Bulgaria and Romania.

According to the Montreux Convention on the status of the straits, warships of countries that do not have access to the Black Sea may remain no longer than 21 days in the sea.

Russian Foreign Minister Sergei Lavrov earlier said that the presence of US ships in the Black Sea has often exceeded the limit under the convention.