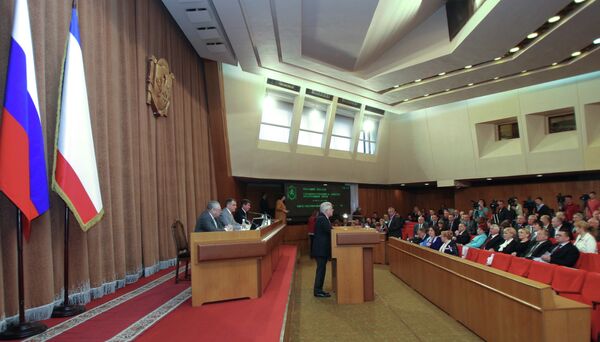 The Crimean parliament on Friday is due to adopt a new constitution for the region, which has been already agreed upon with the Kremlin, the speaker of Crimea's parliament has said.

MOSCOW, April 9 (RIA Novosti) – The Crimean parliament on Friday is due to adopt a new constitution for the region, which has been already agreed upon with the Kremlin, the speaker of Crimea's parliament has said.

“I’m convening an extraordinary session on Friday. This will be a historic session of the State Council which will adopt the constitution of Crimea as a subject of the Russian Federation,” Vladimir Konstantinov said.

The new constitution defines the republic as a democracy and states that its territory is “united and indivisible,” the Kommersant business daily said Wednesday.

The report said, citing Crimean sources, that the number of lawmakers in the republic’s parliament will be cut from 100 to 50 and the share of deputies elected on party lists will decline by 25 percent. No national or cultural autonomous regions are envisaged by the document.

A group of lawmakers led by Grigory Ioffe, the first deputy speaker of the region’s parliament, wrote the text, with their Russian counterparts also playing a key role in the drafting process, Kommersant said.

Konstantinov said in an interview with the Rossiya 24 television network on Wednesday that the new constitution enshrines the right of legal initiatives and envisages increased funding for regional programs in Crimea.

Crimea, previously an autonomous republic within Ukraine, refused to recognize the legitimacy of the government in Kiev which seized power as a result of a coup in February. The region instead sought reunification with Russia, a move backed by over 96 percent of voters in a referendum.

The republic of Crimea and the city of Sevastopol, which has a special status within the region, were added as the 84th and 85th federal subjects of the Russian Federation after President Vladimir Putin signed a decree finalizing the reunification last month.