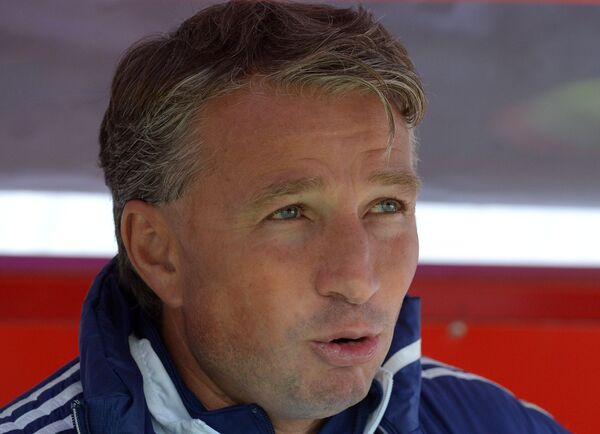 Cherchesov, 50, comes to the capital after impressing at Amkar, who have defied their status as underdogs to fight for a European place this season. He was set to be announced as a replacement for Valery Karpin at Spartak Moscow last month, but talks broke down at the last minute.

"Tomorrow will be Stanislav Cherchesov's last day in the post of Amkar coach, after which he will be in the hands of the club from the capital," Amkar said in a website statement, referring to Dynamo.

Petrescu's departure was announced earlier Tuesday, with Dynamo saying it was a mutual decision. The Romanian hinted that it wasn't, saying: "Dynamo was in first place for me, and my family only in second. ... But if that wasn't enough, then the management had the right to take the corresponding decision."

Cherchesov spent two years in charge at Spartak Moscow and guided the club to a second-place finish in 2007. He played more than 300 games for Spartak as a goalkeeper in the 1990s and won 39 caps for Russia.

He has also coached Terek Grozny, the now-defunct Zhemchuzhina Sochi and lower-league Austrian teams Wacker Tirol and Kufstein. He is set to leave Amkar in seventh place, just two off the European places.

In the five games since the winter break, Dynamo picked up two wins, two draws and Sunday's defeat. It has left them seven points off Zenit St. Petersburg in second place with six games remaining.

While that may not be the worst form imaginable, Dynamo's new club president and part-owner, the billionaire Boris Rotenberg, may have expected less of a mountain to climb to reach the Champions League.