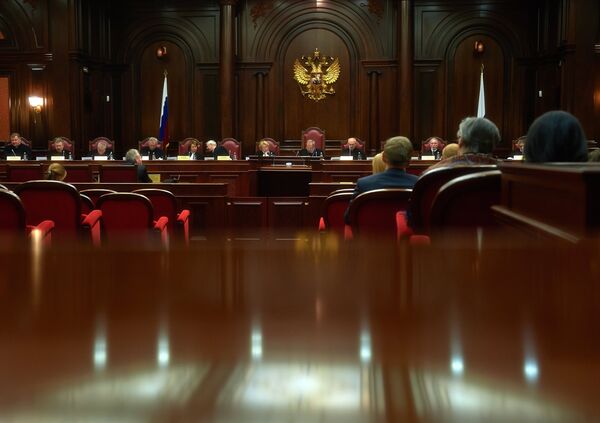 © RIA Novosti . Алексей Даничев
/
Go to the mediabank
Subscribe
International
India
Africa
Russia’s Constitutional Court has struck down a legal challenge to a controversial law requiring civil society groups to register as “foreign agents” if they receive funding from abroad.

ST. PETERSBURG, April 8 (RIA Novosti) – Russia’s Constitutional Court has struck down a legal challenge to a controversial law requiring civil society groups to register as “foreign agents” if they receive funding from abroad.

The court ruled, however, that the minimum fine of 300,000 rubles ($8,400) imposed on those who fail to register with the Russian Justice Ministry should be reduced.

The law passed in November 2012 obliges non-governmental organizations (NGOs) that are engaged in political activity and receive any funding from abroad to register as "foreign agents" and include the label on all of their publications.

Critics, including Human Rights Commissioner Vladimir Lukin, argue that the law lacks a clear definition of political activity, which leads to abuses of citizens’ constitutional rights.

“The contested norm of the Administrative Offences Code does not contradict the Russian Constitution, as it has no retroactive force and envisages responsibility only in case if a non-profit organization fails to submit a request to be registered as a ‘foreign agent’ in line with the procedure,” the court said in its ruling.

In particular, the court said that any attempts to find a negative meaning with the term “foreign agent,” a Soviet-era term resonant with espionage and treason to most Russians, have no legal grounds.

Distinguishing such NGOs has a goal of safeguarding the interests of the public and the state, the court said, adding that this cannot discredit organizations and does not mean meddling in their affairs.

The court said that fines for failing to register as “foreign agents” on time, reaching up to 500,000 rubles ($14,000), are against the Constitution as they don’t allow “imposing punishment below the lower limit.”

Defining the term political activity of an organization, the court said such an activity aims at influencing the country’s politics or shaping public opinion.

Human rights activists urged Russia to repeal the “foreign agent” law, saying it has been disrupting the work of non-governmental organizations in the country since it came into force.

Russian President Vladimir Putin said Monday the country will not allow the activities of NGOs to be used toward destructive ends as has recently happened in Ukraine, where such organizations sponsored nationalistic and neo-Nazi organizations, as well as the gunmen behind the unconstitutional overthrow in February.

Putin said the law is equivalent to the US Foreign Agents Registration Act (FARA), passed in 1938, that requires that agents representing the interests of foreign powers disclose their relationship with the foreign government and reveal their related activities and finances.

Commenting on the law, Putin said last April that Russia has no bans on political activity for organizations that receive funds from abroad, but just wants to know the origin and final destination of the money.