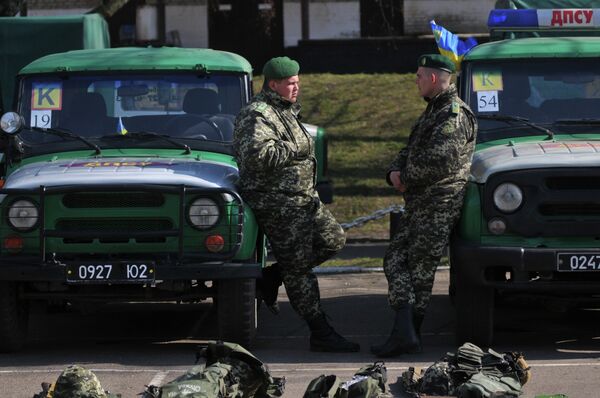 Malyshkin was heading to Lugansk, an eastern Ukrainian city rocked by large-scale protests over the weekend in support of greater regional autonomy.

The journalist was denied entry after border guards discovered his press card and other documents while inspecting his luggage.

An official document issued by law enforcement, states that the correspondent was denied entry because he was “unable to substantiate the purpose of his visit to Ukraine.”

Earlier in the day, RIA Novosti correspondents were prevented from joining other media representatives on a press tour of the premises of the Kharkiv city administration, which had earlier been seized by protesters.

The guard who let journalists through police cordons explained the denial was due to the fact the journalists worked for a Russian media outlet.

In late January, RIA Novosti correspondents were prevented from attending a news conference by Europe’s top diplomat Catherine Ashton in Kiev. David Stulik, press and information officer of the Delegation of the European Union to Ukraine, said the briefing was by invitation only.

The Organization for Security and Cooperation in Europe (OSCE) has repeatedly criticized Ukraine’s refusal to allow Russian journalists onto its territory and other widespread infringements on press freedom by the country’s new authorities.

The organization said such incidents run counter to obligations that Ukraine had undertook as a member of the organization, including under the Helsinki Final Act.

Konstantin Dolgov, the Russian Foreign Ministry’s point man for human rights, said last week that refusal to allow Russian journalists into Ukraine is a sign of Kiev being afraid its brainwashing campaign will come to an end.