OPINION: Russia to Benefit From US Suspension of Nuclear Cooperation Program 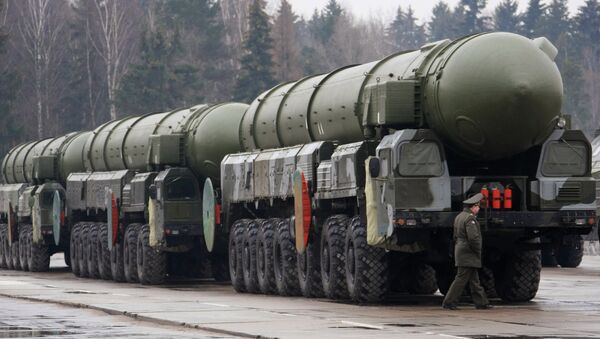 © Sputnik / Mikhail Fomichev
/
Go to the photo bank
Subscribe
Washington’s decision to end cooperation with Moscow on dismantling weapons of mass destruction due to the crisis in Ukraine will free up Russia for a military partnership with China, a Russian defense expert has said.

MOSCOW, April 8 (RIA Novosti) – Washington’s decision to end cooperation with Moscow on dismantling weapons of mass destruction due to the crisis in Ukraine will free up Russia for a military partnership with China, a Russian defense expert has said.

“I think that if the US halts cooperation, Russia may create a new military bloc with China. It will be a serious alliance that will rival NATO,” said Anatoly Tsyganok of Moscow State University, noting that Beijing preferred not to rush things at the moment.

The United States announced Tuesday it was going to phase out a decades-long joint effort with Russia to dismantle weapons of mass destruction in former Soviet republics, called the Cooperative Threat Reduction Program.

The CTR agreement, also known as the Nunn-Lugar program, dates back to the early 1990s and led to the decommissioning of scores of nuclear, biological and chemical weapons after the breakup of the Soviet Union.

Tsyganok, who heads the Military Forecasting Center at Moscow State University, believes the United States is desperately afraid of Russian-Chinese cooperation on military and technical matters.

The freeze of another US-Russia bilateral program could push Moscow closer to its eastern neighbor, a nightmare scenario for Washington, he said.

Other experts say that Russia has long regarded the Nunn-Lugar program as a burden, which it will be happy to shake off.

Igor Korotchenko, Director of the Center for Analysis of the World Arms Trade, believes the end of cooperation will deprive the United States of a unique source of classified data on Russia’s nuclear potential.

“Over the past few years, this program has been a de facto cover-up for American intelligence inroads in Russian nuclear facilities," he said. "Now the Americans are going to lose out on this opportunity."

Korotchenko noted that Russia has learned to rely on its own capabilities to secure its nuclear sites, as well as to develop, produce and store nuclear weapons, and no longer needed foreign assistance.

In 2012, Russia complained about the program being out of sync with its concept of cooperation, but the United States succeeded in pushing through an interim agreement that scaled down the number of bilateral projects and restricted US monitors’ access to Russian nuclear sites.