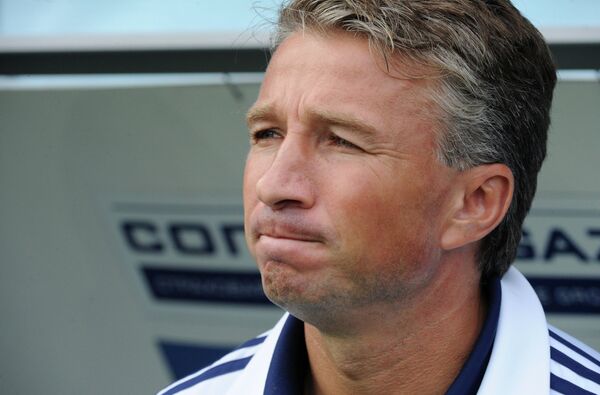 © RIA Novosti . Vladimir Fedorenko
/
Go to the photo bank
Subscribe
Dynamo Moscow have parted company with Romanian manager Dan Petrescu after a mediocre run of form that culminated in the weekend's 4-0 thrashing by lowly Anzhi Makhachkala.

MOSCOW, April 8 (R-Sport) - Dynamo Moscow have parted company with Romanian manager Dan Petrescu after a mediocre run of form that culminated in the weekend's 4-0 thrashing by lowly Anzhi Makhachkala.

Dynamo are fourth in the Russian Premier League, but Sunday's shock defeat dealt a body blow to their hopes of qualifying for the Champions League for the first time in six years.

"Dynamo have torn up the contract with Dan Petrescu by mutual consent," the club said on Twitter.

Petrescu was quoted as saying he had been totally dedicated to Dynamo's and that he respected the club's decision.

"Dynamo was in first place for me, and my family only in second," he was quoted as saying on the Dynamo website. "But if that wasn't enough, then the management had the right to take the corresponding decision. We part as friends."

In the five games since the winter break, Dynamo picked up two wins, two draws and Sunday's defeat. It has left them seven points off Zenit St. Petersburg in second place with six games remaining.

While that may not be the worst form imaginable, Dynamo's new club president and part-owner, the billionaire Boris Rotenberg, may have expected less of a mountain to climb to reach the Champions League.

"Last year Dan plucked the club out of a difficult situation, but lately no progress has been seen," Dynamo sporting director Guram Adzhoev said on Dynamo's website. "We need to move forward."

Petrescu turned around Dynamo last season, arriving with them rock-bottom and leading them to finish seventh. He said in September that the target for the season was a Europa League place, which would mean finishing in the top five.

Last month Adzhoev publicly warned former Chelsea right-back Petrescu that Dynamo must win more games if he is to keep his job, and the announcement is the result of a board meeting Dynamo held Tuesday.

Adzhoev confirmed that Dynamo were in talks with Amkar Perm coach Stanislav Cherchesov about the newly vacant post. Cherchesov was turned down for the Spartak Moscow job last month.

"I hope we can present him as the new head coach soon," Adzhoev was quoted as saying. If Cherchesov is appointed this week, his first game in charge of Dynamo could be Monday's meeting with relegation candidates FC Volga.

Adzhoev added that in interim charge of the Dynamo first team is Nikolai Kovardaev, who was briefly a Dynamo player in the early 1990s and has held various low-level coaching roles at the club since 2012.

Four of Petrescu's assistants have also quit Dynamo, the club said in a statement.

UPDATES with Petrescu quotes, name of interim coach, adds that Petrescu's assistants have also left club, details of next fixture