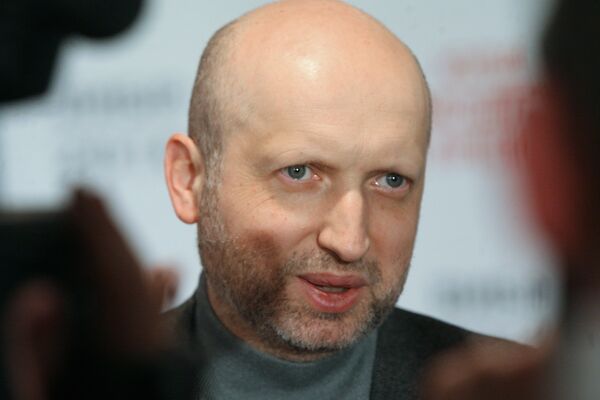 Ukraine’s interim president vowed to introduce tough “anti-separatism measures” Monday in response to rallies over the weekend for greater autonomy in the country’s mainly Russian-speaking eastern and southern regions.

Acting President Olexander Turchinov said Ukraine’s parliament, the Verkhovna Rada, will consider legislation on Tuesday that would make criminal liability for separatism harsher, and will also examine banning the activities of a range of political parties and social organizations.

“Tomorrow, one of the first things the Ukrainian Verkhovna Rada will do is consider stiffening criminal liability for separatism and other crimes against the state,” Turchinov said.

He added that banning the activities of a number of political parties and social organizations that “promote separatism” would also be discussed.

The acting president said that anti-terrorist measures would be used against those who took up arms in the east, a region where residents fear that the recent surge of Ukrainian nationalism could unfairly marginalize the substantial ethnic Russian community.

“Last night an anti-terror headquarters was set up, and anti-terrorist measures will be used against those who took up arms,” Turchinov said, adding “the protection of our eastern borders has been strengthened.”

Moscow said that a federal form of government is the only way out of the protracted political crisis in Ukraine, currently a unitary state which is de-facto split into a Ukrainian-speaking west and Russian-speaking east and south.

The new government, which seized power as a result of a coup in late February, has so far refused to consider the possibility of a federal Ukraine.

Weekend rallies have been held regularly in eastern Ukraine since the new government came into power amid protests against President Viktor Yanukovych and his decision to ditch European integration in favor of stronger ties with Moscow.

On Sunday, rallies in support of greater autonomy for regions with substantial ethnic Russian communities were held in the eastern cities of Donetsk, Kharkov and Lugansk. Protesters demanded a popular vote to decide on the status of their regions and managed to take regional administration buildings under their control.

In Lugansk, protesters also seized the regional headquarters of the Security Service of Ukraine.

On Monday, a council established by pro-federalization demonstrators in Donetsk declared plans to schedule a referendum by mid-May on the formation of an independent Republic of Donetsk, which could seek to join Russia.

Residents of Donetsk and Lugansk earlier elected their own governors, instead of those appointed directly from Kiev, both of whom were detained and face criminal charges.