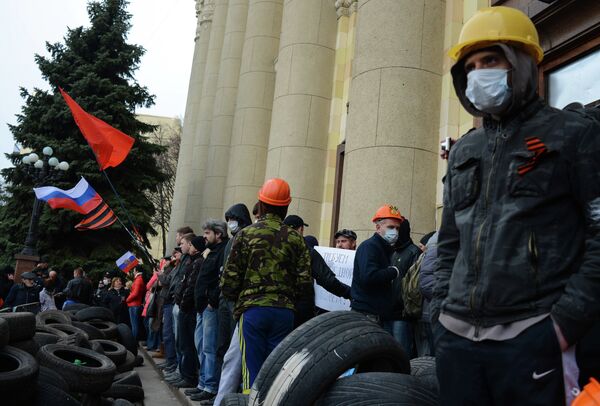 © RIA Novosti . Chekachkov Igor
/
Go to the photo bank
Subscribe
The violent suppression of anti-government demonstrations in eastern Ukraine would lead to a full-scale civil war, the president of the Center of System-based Analysis and Forecasting told RIA Novosti on Monday.

MOSCOW, April 7 (RIA Novosti) - The violent suppression of anti-government demonstrations in eastern Ukraine would lead to a full-scale civil war, the president of the Center of System-based Analysis and Forecasting told RIA Novosti on Monday.

"A violent crackdown is a possibility since [former Ukrainian Prime Minister] Yulia Tymoshenko has called to start shooting to quell the mob," Rostislav Ishenko said.

"This will trigger a totally reverse reaction, with people organizing resistance. Then it will turn into a full-scale civil war," Ishenko said.

Protests in support of Ukraine's federalization took place Sunday in the eastern Ukrainian cities of Donetsk, Kharkov and Lugansk. Demonstrators carrying Russian national flags urged authorities to allow their regions to hold referendums to determine their status within the country.

Protestors in Donetsk and Kharkov managed to take control of municipal buildings and demonstrators in Lugansk seized the regional office of the national security service. Six protesters detained during the attack were later released by authorities.

The eastern rallies have also spread to the southern city of Odessa, where protesters called for an end to political repression.

According to Ishenko, there are several possible reactions by the interim government to the ongoing demonstrations, including launching negotiations, cancelling the upcoming early May 25 presidential election and adopting a new constitution that would provide for a federal form of government and guarantee Russian as an official language.

Ishenko noted that while the demonstrators have protested against the new government in Kiev and called for Ukraine's federalization, they have yet to come up with any specific demands.

Protesters in eastern Ukraine have been gathering every weekend with participants refusing to recognize the legitimacy of the new regional governors appointed following the overthrow of President Viktor Yanukovich.

They have periodically managed to take temporary control over municipal buildings and demonstrators in Donetsk and Lugansk have elected their own leaders, who were later detained.