OPINION: US Instigating ‘Yugoslav Scenario’ of Fraternal Genocide in Ukraine 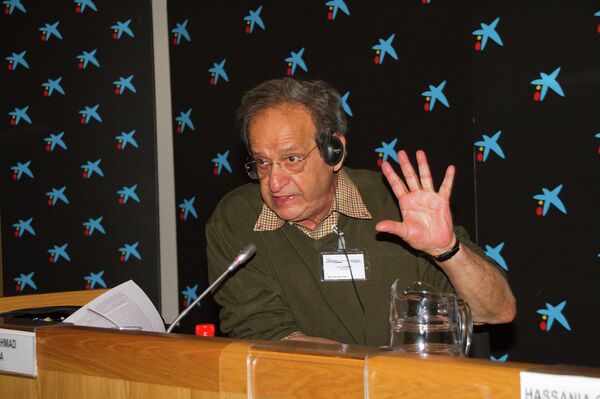 The US effort to turn Ukraine into a forward area for positioning NATO bases is paving the way for fraternal genocide and ethnic cleansing in the former Soviet state, repeating the Yugoslav scenario, Aijaz Ahmad, a famous Indian philosopher and political expert said in an article in a leading Indian newsmagazine, Frontline.

NEW DELHI, April 4 (RIA Novosti) - The US effort to turn Ukraine into a forward area for positioning NATO bases is paving the way for fraternal genocide and ethnic cleansing in the former Soviet state, repeating the Yugoslav scenario, Aijaz Ahmad, a famous Indian philosopher and political expert said in an article in a leading Indian newsmagazine, Frontline.

The conflict in Yugoslavia - a former European country that separated into Slovenia, Macedonia, Croatia, Serbia and Montenegro - culminated in a series of NATO bombings in March 1999 in response to alleged widespread atrocities by Serbian forces against ethnic Albanians in the province of Kosovo.

As a result of the 78-day NATO bombing campaign, Serbia, a nation with historic ties to Russia, lost control of Kosovo province, which declared independence in 2008. Moscow compared last month's Crimea secession from Ukraine with Kosovo's secession from Serbia, saying Kosovo established a precedent and Crimea followed suit.

In his article, "The ‘Great Game' in Europe," Ahmad wrote that in February the United States sponsored a Euro-Nazi coup in Kiev and, in response, the reunification of Crimea, formerly a Ukrainian region, with Russia in March signaled a "turning point and a watershed event" in the post-Soviet era.

Ahmad wrote that on the heels of US President Barack Obama's China-containment strategy, known as the "Asian pivot," Washington has started a European pivot with the goal of encircling Russia and abolishing a crucial buffer between Moscow and the advance of a network of NATO bases into territories formerly part of the Warsaw Pact and the Soviet Union.

Ukraine, like the Serbo-Croatian region in the former Yugoslavia, is a borderland shared between the East and the West, categories developed by US political scientist Samuel Huntington, the philosopher wrote.

Croatia, with its Catholic majority, was encouraged to break its union with the predominantly Orthodox Serbia, "with murderous, even genocidal consequences all around."

"In attempting to turn Ukraine into a forward country for positioning NATO bases against Russia, the US is paving the way, wittingly or unwittingly, for potentially that same kind of fraternal genocide and ethnic cleansing," Ahmad wrote.

Commenting on an $18 billion promised IMF loan to Ukraine, Ahmad said he has doubts that the West's economic assistance will indeed help the crisis-hit country. Kiev will need $24 billion to cover its budget deficit, debt repayment, natural gas bills and pension payments this year alone, according to Moody's rating agency.

Over the past two decades, the Russian subsidy for Ukraine's oil and gas purchases has reached about $200 billion. The West is offering little driblets of money, he said, adding that "without Russian generosity, the Ukrainian economy will be in ruins."

"IMF-imposed austerity on a ruined economy and NATO-propelled militarization for eyeball-to-eyeball confrontation with Russian power is just the kind of combustible combination that may well lead to a civil war, a regional war, and heaven knows what else - in a country where 70 per cent in a recent Gallup poll voted against joining NATO," he wrote.

Ahmad said China and India have supported Moscow in its actions in Ukraine, adding that a strategic alliance between Russia, which has vast mineral deposits, and China, the world's second largest economy, could become one of the positive results of Washington's fiasco in Ukraine.