Ukraine’s Economy Would Have Collapsed Without Russian Aid – IMF Chief 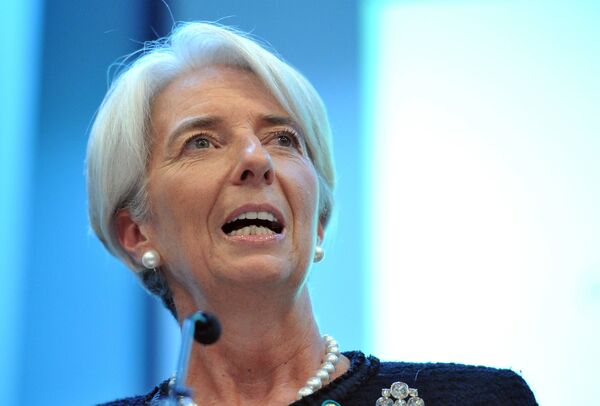 Ukraine's ailing economy would have collapsed without Russia's financial help, the head of the International Monetary Fund said Wednesday.

IMF Managing Director Christine Lagarde said that the Eastern European country's economy had hit a wall last year and was heading for disaster when Russian bailout money averted a catastrophe.

"Without the support that they were getting from this lifeline that Russia had extended a few months ago, they were heading nowhere," Lagarde said in an interview broadcast on the US PBS channel.

Russia made a crucial decision to invest a hefty $15 billion in Ukrainian eurobonds late last year, disbursing the first tranche of $3 billion in December. Moscow and Kiev also agreed to steeply cut gas prices for Ukraine in an effort to boost the country's ailing economy.

But the cash injections and discounts were frozen following a coup amid violent protests in February that led to far-right parties gaining key positions in the new government.

The IMF chief confessed that Ukraine had been cut off from international financial markets. She stressed that IMF money comes at a price, meaning Ukraine was expected to do what it had to do to reform its economy, including making some hard choices.

"It's an economy that needed reforms, that needed profound transformation of its fiscal policy, of its monetary policy, and of its policies on energy," Lagarde said.

The Washington-based fund said last week it had signed a binding accord with Ukraine, under which Kiev was to receive $14 to $18 billion in standby credit in exchange for painful economic reforms. Ukraine expects to get a total of $27 billion in the next two years.