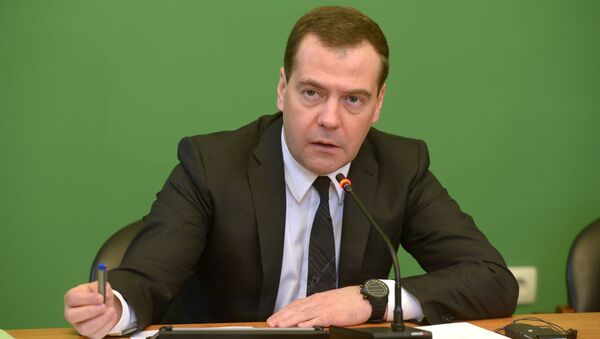 "Taking into account the current situation, it's obvious that economic interests should not be the victim of political ambitions, prejudices, or political positions in general, even if our approaches to the issue differ," Medvedev said during a roundtable discussion at Russia's Higher School of Economics.

Medvedev said Moscow should "reassess its participation in the global economy," focusing on the Eurasian integration project, involving Russia, Kazakhstan and Belarus, which is planned to be Russia's counterweight to the European Union.

The Eurasian project, proposed by Vladimir Putin in 2011, envisages the creation of the Eurasian Economic Union (EAU), a proposed economic union of post-Soviet states, by next year. Armenia and Kyrgyzstan have also pledged to join.

The prime minister said Russia also seeks to develop ties with other economic partners in Europe, the United States and other regions.“Obviously, all this should be based on transparent principles from the perspective of the development of free competition and the inadmissibility of artificial barriers,” Medvedev said.

The US and EU have repeatedly warned Russia of economic pressure and international isolation if tensions over Ukraine continue to escalate. Russia's Foreign Ministry Sergei Lavrov said last month that talking to Russia in the language of sanctions is "inappropriate and counterproductive" and warned its Western partners about the "boomerang effect" that sanctions would have.