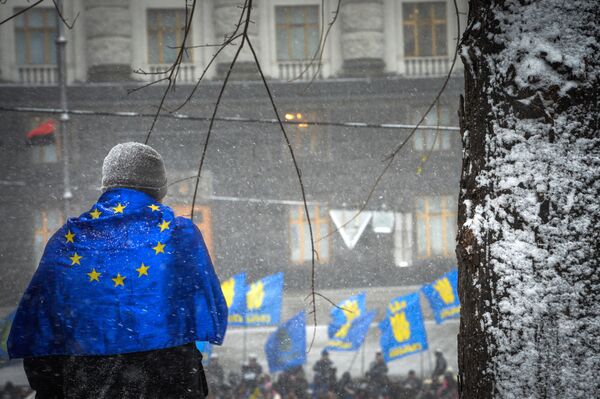 The European Union and leading EU countries have essential capitulated on their Ukraine politics and the connected hostility towards Russia, says Jon Hellevig, Managing Partner of the Moscow-based Awara Group company and a longtime observer of Russia's development.

"They have been defeated on all fronts and have had to admit their miscalculations," Hellevig told RIA Novosti, adding that the EU was wrong from the very beginning in its operation to bring about regime change in Ukraine.

"USA had the lead in the operation to topple Yanukovich through the violent street riots by use of radical, even neo-Nazi, storm troops, but the EU leadership and especially some of their countries where also strongly involved in this (Germany, Poland, Sweden)," Hellevig said.

Despite the strong propaganda in the Western mainstream media, too many people in Europe have understood that the events in Ukraine demonstrated a Western regime change operation, Hellevig maintained.

And this miscalculation brought even the fascist neo-Nazi Svoboda party into the government.

"EU lost the moral upper hand. Opposition parties in all the EU countries are gaining on this, so they have the problem with their own electorate. On top of that the business people oppose sanctions," Hellevig believes.

CEO's of German big business strongly criticized Merkel and EU last week for having pushed Russia in a corner here and the threat of sanctions.

"Business people understood, and have now explained it to the political leadership, that sanctions would hurt very severely the European economies, and much more so than what they would hurt Russia itself," Jon Helleving said.

The European leaders have also miscalculated China's role and its strong commitment to support Russia in this crisis. According to Hellevig, China would not let Russia be isolated.

"Considering all this, EU had no choice but try to cool down the crisis and try to get back to business as usual," Hellevig added.

European Commission Vice President Olli Rehn said Tuesday the European Union should refrain from introducing broad economic sanctions against Russia if the situation around Ukraine does not deteriorate. Rehn believes that no sensible European wants to see economic sanctions or any other escalation to the crisis.

NATO however keeps an anti-Russian line, vowing support to Ukraine and Easter European states. NATO Secretary-General Anders Fogh Rasmussen said at the alliance's foreign ministers in Brussels on Tuesday that the alliance was re-evaluating its cooperation with Russia.

German Foreign Minister Frank-Walter Steinmeier in the meantime said he didn't see a way to membership in NATO for Ukraine. Instead the minister renewed a push for internationally backed direct talks between Russia and Ukraine.

"What will be important in the coming days is getting Russia and Ukraine around a table together," Steinmeier said at a meeting with his French and Polish counterparts in Weimar, Germany, before heading to Brussels.

The joint statement of the ministers said that Ukrainian authorities should distance themselves from extremist groups, called to reach out towards all regions of Ukraine and to ensure the representative nature and inclusiveness of governmental structures and a timetable for the process leading to a constitutional reform.

Jon Hellevig expressed hope that this statement signals EU moving to back Lavrov's plan on federalization of Ukraine.