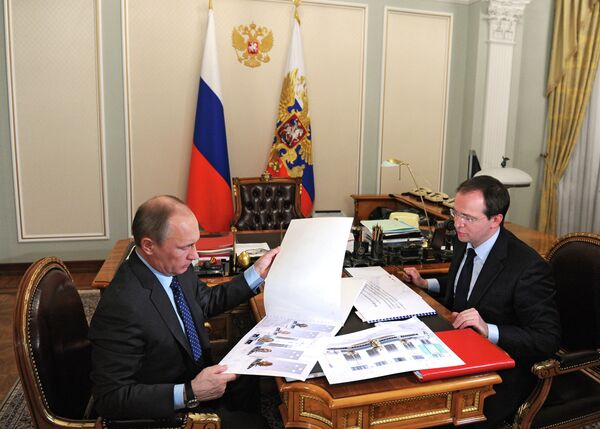 "Make sure to look closely at the material and technical state of the cultural sites, and their physical infrastructure," Putin said to Vladimir Medinsky, the head of the ministry. Medinsky responded that the effort will be expedited and launched soon.

Medinsky further reported that both Crimea's minister of culture and the head of the cultural department of Sevastopol are currently in Moscow. "They have visited almost all of our divisions and departments. Obviously, their current problems are numerous. In fact, their material and technical state is reminiscent to what Russia experienced in the early 1990s," he said.

A collection of Scythian gold currently on display in Amsterdam fell victim to the political changes in the region. The unique objects, preserved by four Crimean museums, are trapped in legal limbo, with Dutch authorities still undecided whether the priceless ancient artifacts should return to Russia or Ukraine.

The valuable artifacts exhibited in the Netherlands should be returned to Crimea, said Mikhail Shvydkoi a Special Envoy to the Russian President on International Cultural Cooperation in an interview with RIA Novosti.

A letter voicing the same demand was drawn up by Sergei Naryshkin, a speaker of the State Duma, addressing Foreign Minister Sergei Lavrov and Medinsky just a day ahead of Putin's meeting on the cultural infrastructure of the newly Russian regions.

The autonomous republic of Crimea held a referendum last month on the status of the region. Ninety-seven percent voted in favor of integrating the region into the Russian Federation with an overwhelming voter turnout of 83 percent.

Russian President Vladimir Putin signed the Federal law ratifying the agreement between the autonomous republic of Crimea and the Russian Federation on March 21. Although widely denounced by the West, Russia welcomed the results of the referendum, proclaiming it fully legitimate and in accordance with international law.