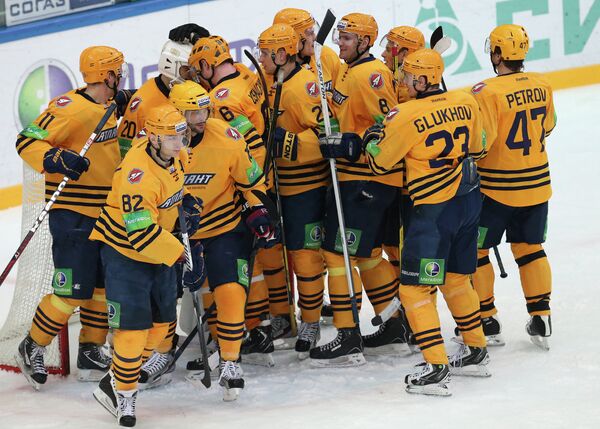 The KHL on Tuesday demanded financially stricken Atlant Moscow Region make up wage arrears to seven players, including former Pittsburg Penguins wing Konstantin Koltsov, after they complained they had not been paid.

MOSCOW, April 1 (R-Sport) - The KHL on Tuesday demanded financially stricken Atlant Moscow Region make up wage arrears to seven players, including former Pittsburg Penguins wing Konstantin Koltsov, after they complained they had not been paid.

Koltsov's Atlant teammate Evgeny Artyuhkin has previously told R-Sport of wage arrears dating back to December. The club has promised it will resolve the problem this week.

"Seven hockey players applied. They didn't demand their contracts be torn up, they asked that the Atlant club be obliged to pay wage arrears," KHL disciplinary commission head Alexander Kinkadze told R-Sport, declining to specify how much payroll had gone unpaid.

There was no word on what punishments could await Atlant if it fails to comply.

Atlant has historically been a power in the KHL, Europe's biggest hockey league, reaching the Gagarin Cup finals in 2011 before defeat to Salavat Yulaev Ufa. However, the team missed the playoffs for the first time this season, finishing ninth in the Western Conference.

One of Atlant's major financial backers is Anton Zingarevich, a Russian businessman who bought 51 percent of English Championship football club Reading FC in 2012 and has since courted controversy by allegedly reneging on promises to buy the remaining 49 percent of the club and to invest millions of pounds in the club.

Another major shareholder in Atlant is the Moscow Region government, which has been keen to reduce its funding for professional sports teams in recent years, also cutting back funding for the state-backed BC Khimki basketball club.

In a separate development, the exodus from bankruptcy-threatened Spartak Moscow continued as Kinkadze said two players, Denis Bodrov and Filipp Toluzakov, would be allowed to leave as free agents after a ruling by the disciplinary commission.

Spartak's main sponsor, Investbank, collapsed in December when its banking license was revoked, plunging the four-time Soviet champion into a financial crisis that caused players to go unpaid.