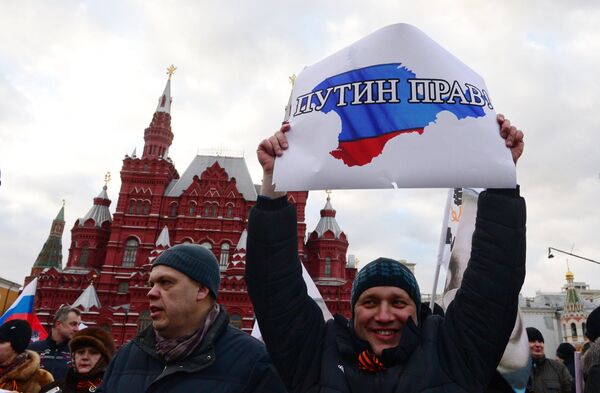 © RIA Novosti . Evgeny Biyatov
/
Go to the mediabank
Subscribe
International
India
Africa
The majority of Russians are not worried about sanctions imposed by the West over the reunification of Crimea with Russia, according to data released Monday by independent pollster Levada Center.

MOSCOW, March 31(RIA Novosti) - The majority of Russians are not worried about sanctions imposed by the West over the reunification of Crimea with Russia, according to data released Monday by independent pollster Levada Center.

Only one-third of those surveyed were worried about possible international isolation due to the country's position on Crimea, while just under half (49 percent) remained unconcerned.

Only 36 percent of respondents were worried about a potential break of diplomatic relations between Russia and Ukraine, while 57 percent were unperturbed by the possibility.  Just over one third of those surveyed reported they were concerned about the prospect of barriers to visiting Western countries.

Twenty-seven percent felt puzzled by the news about the West's sanctions and 35 percent said they felt outraged. Meanwhile, the majority of those asked explain the reaction of the USA and EU as a result of hostility towards Russia and a desire to take advantage of the situation in bringing pressure to bear on the country.

About 20 percent of respondents believe that the West fails to understand the real situation in Ukraine.

After Crimea held a referendum earlier this month in which over 96 percent of voters supported reunification with Russia, the US and EU imposed targeted sanctions against a number of top Russian officials.

Vygaudas Ušackas, the head of the EU's envoy in Moscow, told reporters Monday the sanctions will not impact ordinary Russians.

Russian Foreign Minister Sergei Lavrov has called the sanctions blackmail, saying they will only encourage extremists in Ukraine to continue violent provocations. Lavrov has insisted the Western support of the illegitimate government in Kiev is a double standard, as Western leaders have simultaneously refused to recognize the right of Crimeans to determine their own future.

The survey was conducted among 1600 respondents across 130 towns and cities in Russia March 21-24. The margin of error was 3.4 percent.