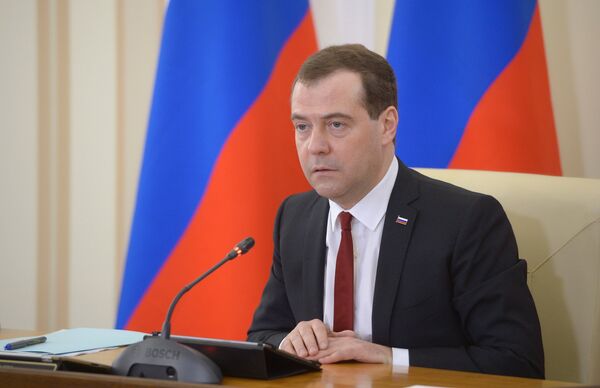 © RIA Novosti . Alexander Astafyev
/
Go to the mediabank
Subscribe
International
India
Africa
Prime Minister Dmitry Medvedev arrived in Crimea on Monday to announce an ambitious plan aimed at meeting the needs of the peninsula's citizens, just 10 days after its reunification with Russia.

SIMFEROPOL, March 31 (RIA Novosti) - Prime Minister Dmitry Medvedev arrived in Crimea on Monday to announce an ambitious plan aimed at meeting the needs of the peninsula's citizens, just 10 days after its reunification with Russia.

"No citizen in Crimea or Sevastopol should lose anything following reunification with Russia. They should only benefit," Medvedev said.

"This is what people are waiting for - the creation of conditions for a calm and well-deserved life, confidence in the future and the feeling that they are part of a strong state," the prime minister added. "We should satisfy these expectations."

Medvedev proposed a sweeping development program to improve the lives of Crimea's residents, ranging from revamping the region's healthcare and education systems to boosting its ailing economy.

Medvedev announced that a ministry for Crimean affairs will be created in the Russian government to oversee the program, to be led by Oleg Savelyev, an official in the Economic Development Ministry.

Russia will designate Crimea as a special economic zone with tax breaks to attract investors, Medvedev said at the meeting in Crimea's capital, Simferopol.

The prime minister also called for an opening of Russian bank branches across the peninsula, adding that provisions to provide loans in rubles have already been taken.

Addressing development issues, Medvedev focused on social concerns, saying pensions in Crimea would be raised gradually until they reach the national level.

Medvedev confirmed Monday that an adequate supply of rubles has been made available to allow Crimeans to exchange all of their Ukrainian currency, which is to be phased out by the end of next year. He also vowed to protect private deposits at local banks, which total 90 billion rubles ($2.5 billion).

Last week, Crimea adopted the Russian ruble as an official currency, in addition to changing the region's time zone to Moscow time, symbolically finalizing the region's incorporation into Russia.

Speaking on measures to help alleviate the region's water shortage, Medvedev said one possibility would be the construction of a desalination plant to supply the region's two million residents with fresh water. He also promised upgrades of the peninsula's roads and other infrastructure.

Medvedev said last week Russian companies could double gas production in Crimea in the next few years in a bid to secure the energy independence of the region, which still depends heavily on Ukrainian utilities.

Russian Deputy Prime Minister Dmitry Kozak, who has been tasked with taking charge of Crimean issues, earlier said that Russia was ready to deal with possible blackouts, adding that cuts in power by Ukraine would be unprofitable for that country's energy sector.

Medvedev called on government officials Monday to spend their summer holidays in Crimea, in a bid to increase tourist flows to the region, famous as a popular Soviet resort destination.

"I am sure that many of our citizens will see again the clean sea, unique nature and of course, hospitality of Crimeans," he said.

Crimea, previously an autonomous republic within Ukraine, refused to recognize the legitimacy of the government in Kiev which seized power as a result of a coup last month, instead rejoining Russia following a referendum on the issue.