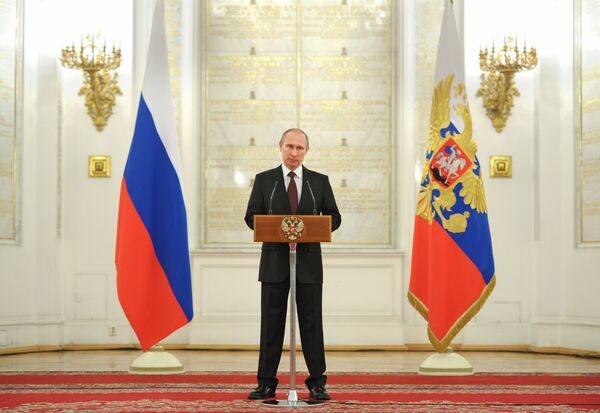 “The intensity and quality of the forces’ training have improved,” Putin said at a ceremony attended by senior commanders.

Putin added the improvement was aided by defense purchases last year, which have equipped the Russian army and navy with modern weapons.

The country’s military budget stands at about 2.5 trillion rubles ($70 billion), making it the world’s third largest behind the US and China.

Last month, Putin ordered snap military drills in Russia's Western and Central military districts, which border Ukraine. The exercises involved dozens of vessels from the Baltic and Northern Fleets and aircraft of the Russian Air Force.

Moscow said the drills had no relation to the political standoff between Russia and the West over Crimea, an autonomous Ukrainian region with an ethnic Russian majority that joined Russia last week.

Russia is expected to conduct large-scale military exercises in the Eastern Military District in September.

The Defense Ministry said earlier that snap checks are to be conducted on a regular basis to ensure constant combat readiness.

The ministry said in November that government spending on military equipment will increase 25 percent this year, to 1.7 trillion rubles ($52 billion), up from 1.35 trillion rubles last year.