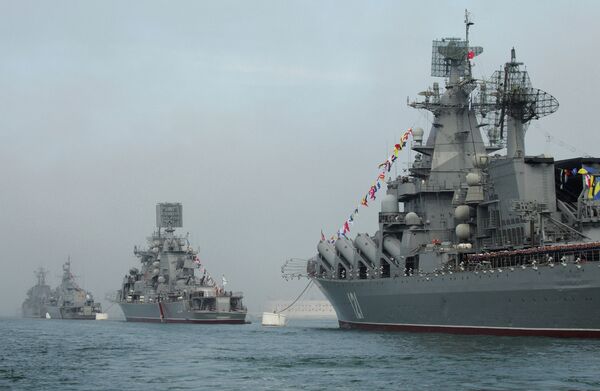 MOSCOW, March 28 (RIA Novosti) - Russia has begun preparations for terminating bilateral agreements with Ukraine related to the status and operation of the Black Sea Fleet, a Kremlin spokesman said Friday.

The decision was made at a meeting of the country's Security Council chaired by President Vladimir Putin.

According to spokesman Dmitry Peskov, the measures to be scrapped include a 1997 agreement on the conditions of the fleet's stay in Crimea, which was extended by 25 years in a 2010 deal by Ukrainian President Viktor Yanukovych.

In exchange, Ukraine received a discount of $100 on each 1,000 cubic meters of natural gas imported from Russia, which was provided for by cutting export duties on the gas, money that would have gone into the Russian state budget.

A bill to void the agreements was submitted to the lower chamber of the Russian parliament, the State Duma, on Friday afternoon.

The Russian Black Sea fleet is headquartered in Sevastopol, a city with special status within Crimea, which became Russian territory last week after 60 years as part of Ukraine.

The Kremlin said earlier this month that as the base is no longer located in Ukraine, there were no legal grounds for the discount to be continued.

Prime Minister Dmitry Medvedev said last Friday that Moscow would seek a reimbursement of the $11 billion Russia lost while the discount was in place.