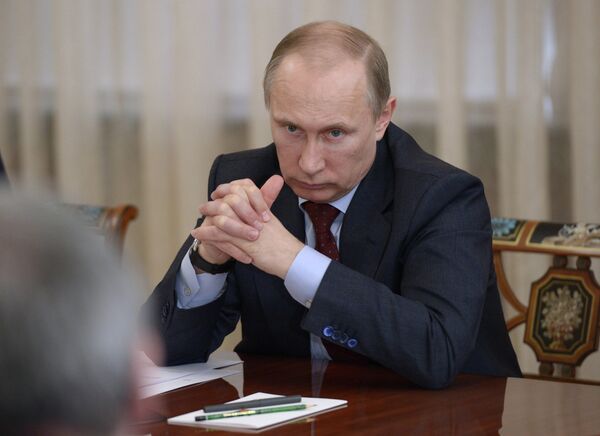 Russian lawmakers should analyze the crisis in Ukraine in order to better defend Russians from terrorism and extremism, President Putin said Thursday, while adding the rights and freedoms of citizens must be protected.

NOVO-OGARYOVO, Moscow Region, March 27 (RIA Novosti) - Russian lawmakers should analyze the crisis in Ukraine in order to better defend Russians from terrorism and extremism, President Putin said Thursday, while adding the rights and freedoms of citizens must be protected.

"In regard to an analysis of all of the color revolutions, including the latest events in Ukraine, obviously we should analyze them in order to protect our citizens from the tyranny of various fanatics, from the tyranny of terrorist elements, and individuals with extreme views," Putin told members of the country's upper house of parliament.

Russia has described last month's uprising in Kiev as an illegitimate fascist coup, which resulted in Moscow taking steps to protect ethnic Russians in Ukraine. Earlier this month, Russian Foreign Minister Sergei Lavrov railed against attempts to justify the actions of the neo-Nazis and their accomplices.

Lavrov said last week that Russia was collecting "all of the facts that show the lawlessness of neo-nationalists and extremists" as well as on the violence that has racked the country during and after the uprising.

"Undoubtedly, we should analyze the events taking place around us - in the information sphere and in the protest movement," Putin said. "But I urge you not to view these events as a reason for any substantial limitation of civil liberties and the right of citizens to freely express their opinion."

The comment came as a response to a speech by Andrei Klishas, a senior Federation Council member, who said that Russia should learn from the deadly uprising in Ukraine and make violators of the law on public gatherings subject to criminal punishment.