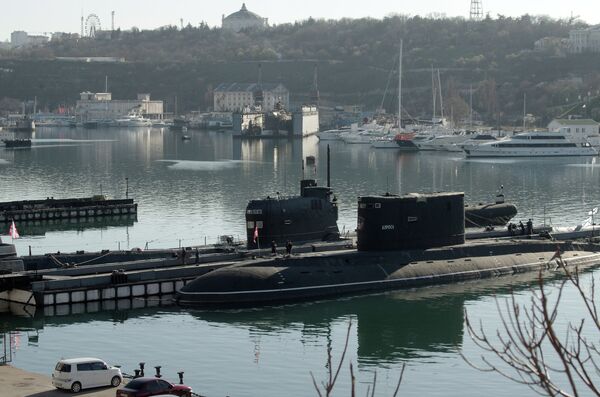 SEVASTOPOL/MOSCOW, March 27 (RIA Novosti) - More than 30 warships and support vessels formerly in the Ukrainian navy could enter into Russia's Black Sea Fleet by the end of the year, but only after they pass inspections, a source in the fleet's headquarters said Thursday.

"Ships that were sailing previously under the Ukrainian flag will not be automatically included in the [Russian] Black Sea Fleet until they have undergone a technical evaluation and we can decide which ships will enter the fleet, and which ones will be scrapped," the source said.

He added the ships' condition would be evaluated by specialists from the Russian navy and shipyards of the Black Sea Fleet.

"This process could take some time, but we hope that it will be completed by the end of the year," the source said, adding the ships currently closest to being combat-ready include three corvettes, two amphibious assault ships and a command ship.

The source expressed doubts about the readiness of several vessels anchored in Sevastopol's Streletskaya Bay, including mine sweepers and missile boats.

"These ships didn't go to sea much so we have a few questions [about their readiness]," he said.

The ships became Russian property last week following the reunification of Crimea, where the ships are based, with Russia.

Leaders of the Russian-speaking region grew concerned about a rising tide of nationalist rhetoric from the country's new leadership that unconstitutionally came to power last month, and scheduled a referendum in which voters overwhelmingly chose to leave Ukraine and join Russia.

Shortly after Russian President Vladimir Putin signed a decree last Friday to ratify the reunification treaty, Defense Minister Sergei Shoigu said those soldiers wishing to continue their service with the Ukrainian armed forces were free to leave Crimea and would receive the required assistance to do so.

Less than 15 percent of the 18,000 Ukrainian military personnel stationed on the peninsula chose to leave.

As of Monday, all military units stationed in Crimea were under the control of the Russian military.