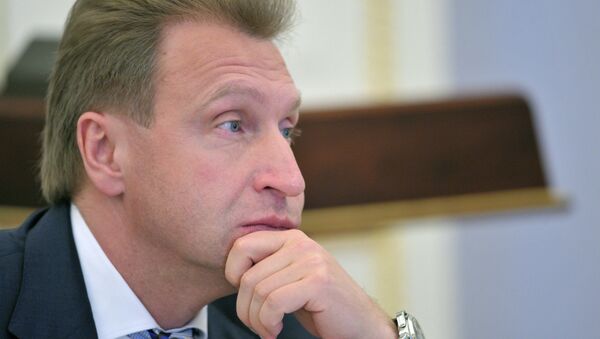 © Sputnik / Aleksey Nikolskyi
/
Go to the photo bank
Subscribe
The Russian government has analyzed how to mitigate the risks of a changing investment climate due to the worsening relations between Russia and the West over the reunification of Crimea, a senior official said Wednesday.

The US, EU and Canada have levied targeted sanctions against Russia, including visa bans and asset freezes, over its position on Crimea, which rejoined Russia following a referendum that saw over 96 percent of voters in the formerly Ukrainian region exercise their democratic freedoms in voicing support of the measure.

"Those who are involved in the economy should understand that the worst-case scenario is not connected with formal sanctions, but how the largest investors in Russia will react as a result of actions on the ground that are not legally formulated," First Deputy Prime Minister Igor Shuvalov said.

"We have not only analyzed these risks, we understand how we need to act in these [market] conditions," he said.

Prime Minister Dmitry Medvedev said Tuesday the country welcomes all business partners and has no plans to restrict commercial activity in the country.

"We have no restrictions [on doing business with foreigners], and we will continue all forms of cooperation with all companies that are operating here," Medvedev said.

Shuvalov reiterated that position Wednesday, while adding the country would also begin seeking investment from other sources.

"We aren't going to slam the door shut or leave traditional markets until we're shoved out," Shuvalov said.

"The most important task now is to actively find new partners who look kindly at our attention, and turn to them and discover opportunities to sell our goods," he said.

Leaders of the G7 group of nations have threatened Moscow with further sanctions in the event of escalation of the Ukrainian crisis, which Russia insists is the inevitable consequence of the West's backing of radical forces in Kiev.