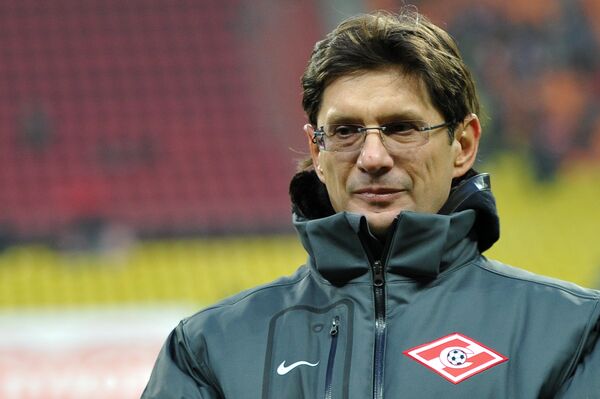 The move is a dramatic change of course from Spartak, who had seemed set to bring back Stanislav Cherchesov, who led the club to second in the league in 2007.

The head coach position at the nine-time Russian champions was left vacant when Valery Karpin departed by mutual consent last week following a poor run of form. Gunko led the team to a 4-0 drubbing at the hands of FC Krasnodar on Saturday.

"It will be Gunko until the end of the season," Fedun said. As for Cherchesov, "we looked, weighed it up and decided that he doesn't suit Spartak," Fedun said.

With eight games to go this season in the Russian top flight, Spartak sit third in the table, seven points off leaders Lokomotiv Moscow and four off Zenit St. Petersburg, who hold the second and final Champions League place. They face Lokomotiv away on Saturday.

Gunko, 38, has held various coaching roles with Spartak's youth and reserve sides since 2008, but has never previously coached a professional club. He had an undistinguished career as a defender in the late 1990s and early 2000s, including two years in Spartak's reserves, during which time he did not play for the first team.

Fedun's statement confirming Gunko comes just hours after Cherchesov said he had held talks with Spartak management and hinted he might take up the Spartak job next week.

Cherchesov has impressed this season by guiding his current team, underdogs Amkar Perm, to seventh place in the table and a shot at European qualification.

Cherchesov spent two years as coach at Spartak and guided the club to a second-place finish in 2007. He played more than 300 games for Spartak as a goalkeeper in the 1990s and won 39 caps for Russia.

Karpin, a legend for Spartak as a player, was dismissed three games after the winter break, having overseen humiliating defeats to third-tier Tosno in the Russian Cup, second-from-bottom Terek Grozny in the league, and the squandering of a 2-0 lead to draw 2-2 with Anzhi Makhachkala.