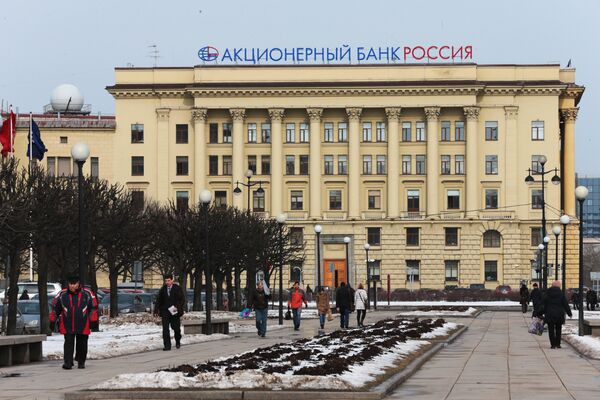 © RIA Novosti . Igor Russak
/
Go to the mediabank
Subscribe
International
India
Africa
A Russian bank targeted by recent US sanctions has asked its clients to refrain from foreign currency payments to their accounts.

MOSCOW, March 24 (RIA Novosti) – A Russian bank targeted by recent US sanctions has asked its clients to refrain from foreign currency payments to their accounts.

Bank Rossiya, considered by the US Treasury as a personal bank for more than a dozen Russian government officials, including President Vladimir Putin, is among several Russian banks hit by punitive sanctions levied by Washington last week in response to the reunification of Crimea with Russia.

The bank is partly owned by Russian businessman Yuri Kovalchuk, who is also named on the sanctions list.

Bank Rossiya added in its statement posted online Monday that transactions in rubles were unaffected.

On Sunday, the companies resumed payments from cards issued by SMP Bank, which is majority owned by brothers Arkady and Boris Rotenberg, who were both named on the US sanctions list.

The EU expanded the number of Russian and Ukrainian officials under sanctions to 33 on Friday, just hours after the United States added 20 more officials to its own list.

The Russian Foreign Ministry on Thursday imposed sanctions against nine senior US officials as a proportional response.