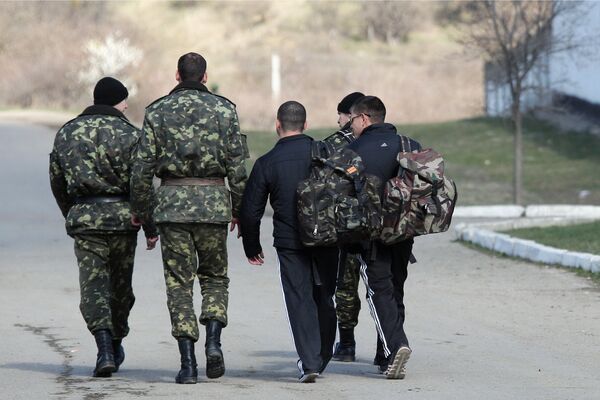 Less than 2,000 of Ukrainian troops serving in Crimea decided to leave the peninsula for Ukraine, the Russian Defense Ministry said on Saturday.

MOSCOW, March 22 (RIA Novosti) - Less than 2,000 of Ukrainian troops serving in Crimea decided to leave the peninsula for Ukraine, the Russian Defense Ministry said on Saturday.

"As of March 21, less than 2,000 out of 18,000 Ukrainian servicemen staying on the territory of the Republic of Crimea decided to go to Ukraine," the ministry said in a statement.

Those willing to continue their service in the Ukrainian armed forces will be provided with transport to carry their families and belongings to the Ukrainian territory.

A total of 147 military units in Crimea have hoisted Russian flags instead of Ukrainian and applied to join the Russian armed forces.

"St. Andrew's flags of the Russian Navy have been raised on 54 out of 67 vessels of the Ukrainian Navy, including eight warships and one submarine," the defense ministry said.

Ukraine's only submarine, the Zaporizhzhia, joined the Russian Black Sea Fleet earlier on Saturday and will be soon relocated to its base.

Russian President Vladimir Putin signed a decree on Friday to ratify the treaty providing for the reunification of the Crimean Peninsula with Russia.
Leaders in the predominantly Russian-ethnic republic refused to recognize the legitimacy of the government in Kiev that came to power amid often violent protests last month, instead seeking reunification with Russia.