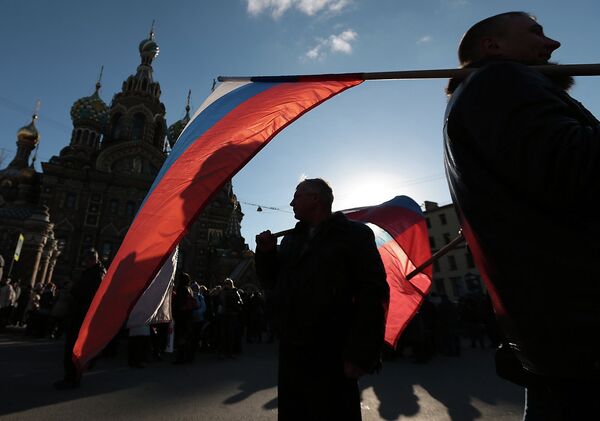 Kiev has described Russia’s decision to absorb the breakaway region as an act of annexation, which means forcible seizure of the Ukrainian territory, and said it reserves the right to take steps to resolve the conflict in line with the international law.

"The Ukrainian side denies any sovereignty of the Russian Federation on the territory of Ukraine, which is occupied by Russia,” the ministry said Tuesday in the note which came after President Vladimir Putin and Crimean leaders signed a treaty on Crimea joining Russia.

Two people – a pro-Russia militiaman and a Ukrainian soldier – were killed Tuesday when snipers opened fire from a single location on both Ukrainian and pro-Russian forces in the Crimean capital, Simferopol. One Ukrainian and one pro-Russian were injured, Crimean police said.

In remarks on the reports of bloodshed, Kremlin spokesman Dmitry Peskov told the BBC Tuesday the incident could have been a premeditated provocation from those wishing to cause the conflict.

Peskov said Ukrainian soldiers remaining in Crimea will have to make a choice about joining the Crimean forces which would become part of the Russian army or leaving the peninsula.

There are about 20,000 Ukrainian soldiers in Crimea, home to the Russian Black Sea Fleet and Russian territory that was gifted to Ukraine by Soviet leaders in 1954.

In his Tuesday’s address to the parliament, President Putin said the Black Sea peninsula has always remained an inseparable part of Russia in the hearts and minds of Russians and he was restoring a “historic injustice.”

Ukraine refused to recognize Crimea's secession and subsequent reunification with Russia. Ukraine’s coup-imposed Prime Minister Arseny Yatsenyuk told the government Tuesday: "The conflict is shifting from a political to a military stage.”

Russian Foreign Minister Sergei Lavrov told US Secretary of State John Kerry in a phone conversation Tuesday that Western sanctions over the Crimea dispute were "unacceptable" and would not remain without consequences." He did not say what those consequences might be.

The US and EU imposed sanctions Monday on senior Russian officials following a referendum in Crimea on Sunday in which voters overwhelmingly supported secession and reunification with Russia.